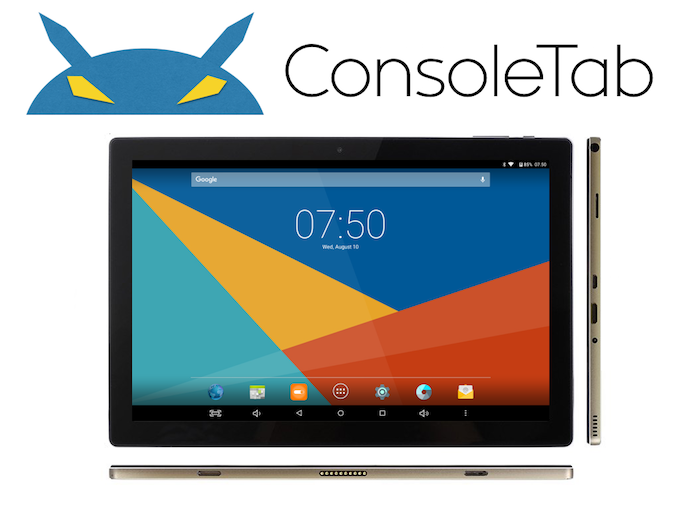 Console Inc., of Santa Clara, CA is gearing up to open preorders for its new ‘ConsoleTab’ tablet. This new tablet is designed to meld the Android and PC experience into one 10-inch portable device.

UPDATE: We previously reported that this was going to be a Kickstarter project, however we’ve learned this not to be the case.  As such, ConsoleTab wants to clear the air a bit and offer more detail on its previous Kickstarter campaign. Pre-orders are set to go live any time so it’s important we made the distinction.

A message received from its team today reads:

To be clear, we are refunding our Console OS kickstarter backers, and we are working with our manufacturing partners at Teclast to clarify how the device is unique (from different radios, to different storage options, and more). And, we really want to make clear to people that do order that their credit cards will not be charged until it ships.

Key features of the tablet include the new Intel quad core Atom x5-Z8300 running at 1.8GHz and a base 64GB of expandable storage space, as well as 4GB of DDR3 RAM.  This should be plenty of processing power and memory for day-to-day tasks, but we will have to wait to see how it performs in real world applications after the official launch.

Full specs and pre-ordering information can be viewed at the ConsoleTab’s website, but rest assured that they are including some fairly powerful hardware underneath the 1080p screen. Console Inc. is taking a unique approach to this pre-order process by allowing backers to vote on the final color Kinetic Blue, Reflective Gold, and Matte Black.

Jumping into the crowded tablet space may prove to be a challenge for a small company like Console, Inc., but so far the overall design and internal specs show promise. Pair that with a new take on melding the PC experience into the Android OS, and they may just have a device that finds its own niche in the market.