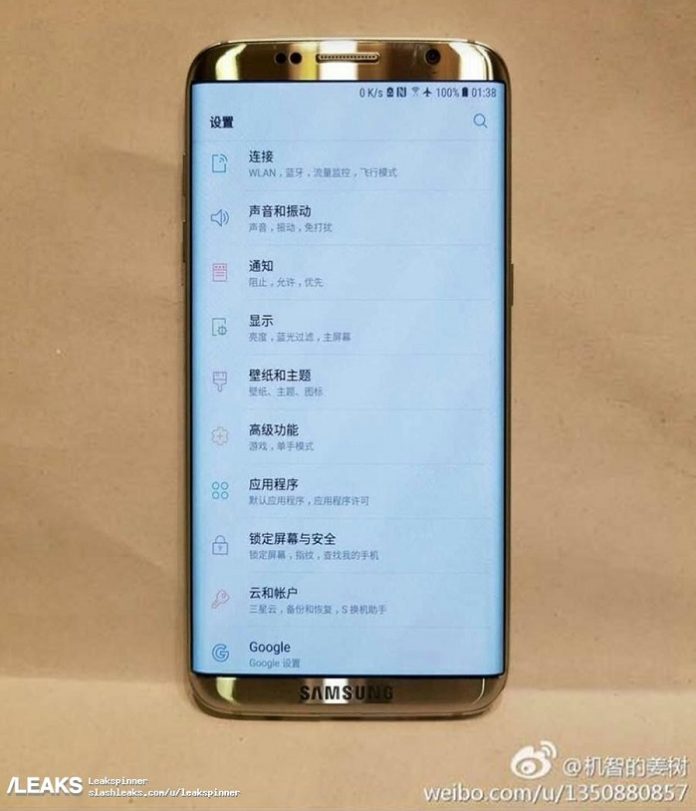 Samsung’s upcoming flagship, the Galaxy S8 is expected to be a glorious device. The Korean tech giant has some sins to atone for following the Galaxy Note7 disaster and an exceptional Galaxy S8 will certainly do the trick and appease disappointed Samsung fans.

Traditionally Samsung unveils its next-gen Galaxy S flagship at MWC in Barcelona. MWC 2017 is set to begin on 27 February, so in theory, we’re just two months away from seeing the Galaxy S8 in its full glory. But while we wait on that, a leak coming out of Asia appears to reveal what looks like the first image of the Galaxy S8.

In league with previous rumors, the purported Galaxy S8 doesn’t have a Home button and appears to be flaunting a curved display and a very anorexic bezel.

However, take this leak with a healthy grain of salt. After all we might be dealing with a photoshopped image of the Galaxy S7 edge.

Anyway, the Galaxy S8 showed in the picture looks sleek enough and rocks a premium gold color that looks quite appealing. The device in the image also appears quite similar to some previous renders we saw leak not so long ago (except they don’t show such a curvy device).

This year Samsung is said to launch two Galaxy S8 models, one with a 5.7-inch screen and one with a 6-inch one, both featuring curved displays like the Galaxy S7 edge. The phones should take advantage of a new Snapdragon 835 processor and boast 6GB of RAM (maybe the larger variant will have 8GB).

Other specs include an iris scanner and S Pen accessory ala Note7, Harman branded speakers and Samsung SDI batteries. Like most flagships coming out this year, the Galaxy S8 is expected to lack the 3.5 headphone jack.

Even if everyone is expecting Samsung to announce the Galaxy S8 at MWC 2017, a recent report claims the Korean tech giant might host a second even in the US a couple of months afterwards.

The new info also reveals the Galaxy S8 release date might be pushed as far as April 18, with Samsung unveiling the flagship in late March or early April. At the moment we can’t really know for sure, but we’ll update you when we will know more.