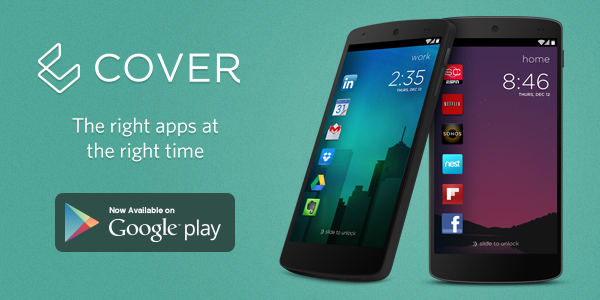 In the last year, there have been many launcher and lockscreen replacements for Android popping up and one of the most recent and popular is Cover.

Cover, which for the last few months has an invite-only beta, is now out of closed beta and available for free in the Play Store.

It’s an interesting app since it lets you set different locations whether you’re at home, work, in the car or out on the town and different apps shortcuts will be displayed on your lockscreen. For each setting, you have a different wallpaper as well. Cover learns what apps you use most and displays them on your lockscreen so you can access them quickly.

All that being said, the only downside to using this replacement is that if you use lockscreen widgets, you can’t use them anymore and you technically can’t set the apps yourself that appear on the lockscreen.

WIth Cover now in the Play Store, the company announced some changes to the app. Apparently over the last six weeks, they’ve “made 100+ improvements” that include optimized battery usage, improved car detection, compatibility with Android 4.4 KitKat, the Nexus 5 and new ART runtime for Android, when peeking and switching between apps, Cover now maintains the state within each app, tutorials on fast app-switching, how to set custom wallpapers/ring volume and how to use it with either a PIN/Pattern security code, more customization options such as those to configure the size and location of app tray target and the ability to share your Cover setup on Facebook, Twitter or Google+.