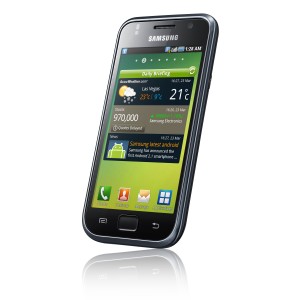 Just left the keynote from Samung and spent a few minutes playing with the Galaxy S.  First off, words cannot describe just how sharp and bright the screen is.  SuperAMOLED really is that – SUPER.  The 4-inch screen is the most crisp image I have ever seen on a handset.  We watched a few minutes of video on the Galaxy S and can say that it’s superior to pretty much anything I’ve seen so far.

Even as big as this phone is, I couldn’t believe how light it was.  It literally felt like half of a phone in my hands.  Angel was pleased at how nice it was in her tiny, gal hands.

In terms of softare, the phone comes with Layar, TeleAtlas, Swype, a document editor, e-book reader, and more.  See below for a full list of confirmed hardware specs, thanks to the press release.

We should expect this to arrive later this summer.  Nobody we met was able to share expected prices or carriers.  We’re off to hit the floor and try some prying.  Be sure to follow us on twitter to get the latest pictures from the show floor!