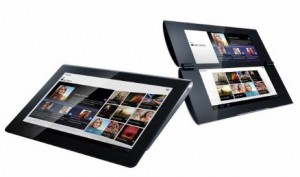 Any of you blokes living in London looking to pick up the new Sony Tablet S this Friday?  You’ll want to get to PC World / Curry’s on Tottenham Court Road nice and early.  Why?  Because the first 100 customers who buy the Sony Tablet S will get a 32″ Sony BRAVIA TV worth £400 for free. For those jealous Yankees here in the states, that’s around $630 in free television.  Doors open at 7:00 AM sharp on September 16th, but staff will begin passing drinks and mini-pastries to customers beginning at 5:00 AM.
At the Black Store, Birmingham City Centre, the first ten customers who buy the 9.4-inch tablet will also receive a £400 32″ Bravia TV.

14th September – Staff at Currys and PC World on Tottenham Court Road are expecting an excited crowd of customers on Friday morning when they open up at 7am to exclusively sell the much-anticipated Sony Tablet S two hours before any other retailer on the high street.

To sweeten the deal for those making the effort to get up super-early, the first 100 customers to buy a Sony Tablet S will also receive a FREE Sony 32” BRAVIA TV* worth £400.

From 5am, staff will be giving out drinks and mini-pastries to early-bird customers and a magician will be on hand to entertain and keep spirits high as they queue while the rest of the capital wakes up.

Mark Slater, Category Director at Dixons Retail, commented: “We are expecting a big buzz outside our Tottenham Court Road store on Friday.  We are really excited to be the first retailers on the high street to be selling the Sony Tablet S and are expecting it to be an instant hit with our customers.”