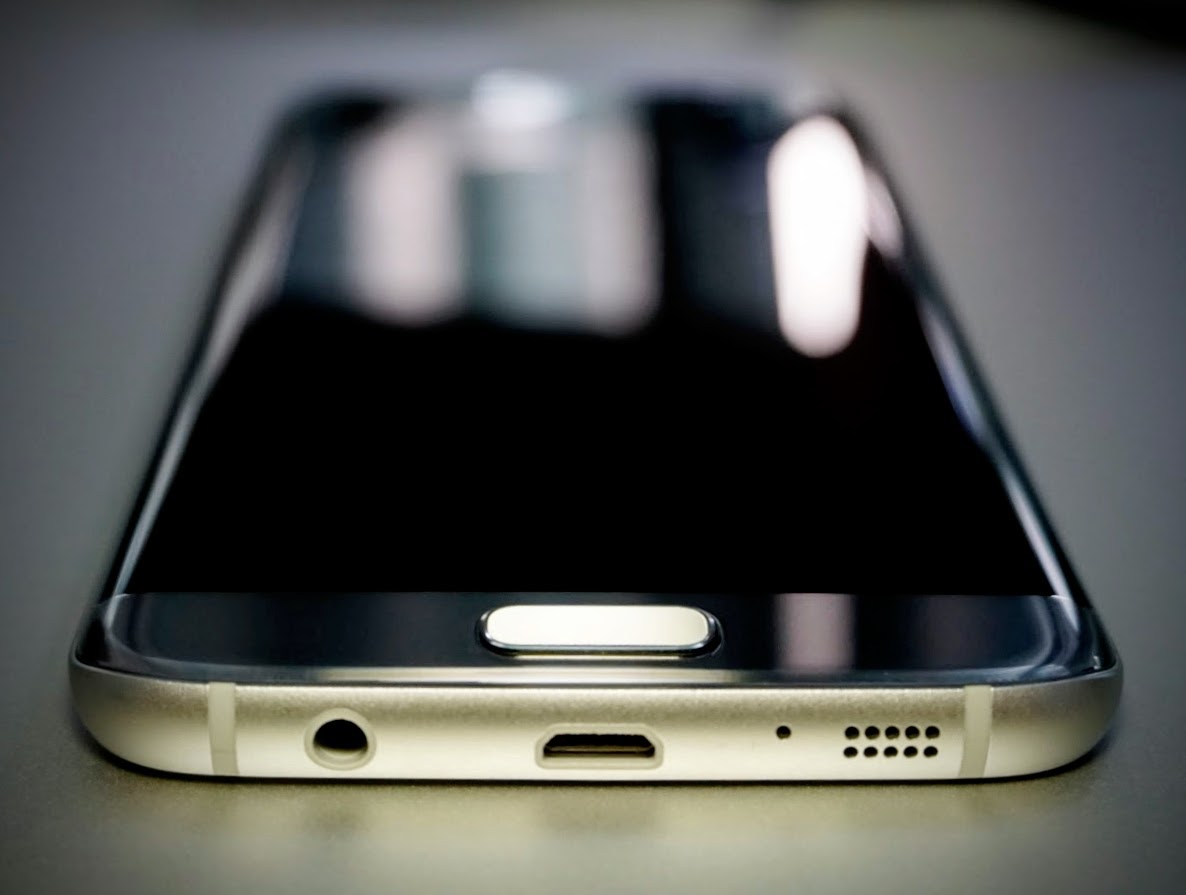 AT&T decided to ship the new Samsung Galaxy S7 edge early and now that I’ve been using the latest device for a day, I thought I’d share some of my first impressions with you. The latest iteration from Samsung is a powerhouse, and is the biggest release of the year for Android (in terms of sales volume).

I’m sure many of you are highly interested in what Samsung brought to the table, so lets get into it.

Samsung opted to improve on top of last year’s radical change to go to all metal and glass as build materials. You can’t blame Samsung as it designed great Galaxy devices in the S6, S6 edge, S6 edge+ and Note5. All of those were arguably some of the best designed phones of 2015. 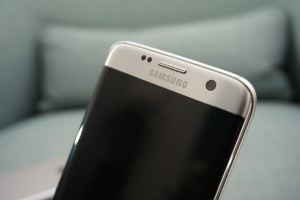 Rather than changing up a good thing, Samsung opted to fix the things its customers complained about, and fixed the camera protrusion as well as adding expandable memory.

It fixed the protrusion by making the phone slightly thicker and expanding the battery up to 3600mAh.

For a phone with a 5.5″ display, the Samsung Galaxy S7 edge is easily one of the most comfortable phones to hold. It handily beats the iPhone 6S plus, which has an identical display size, in being much easier to hold since it is not as wide. And if you compare LG V10 to the S7 edge it simply feels heavy and massive, and everything that a large displayed phone should not be. 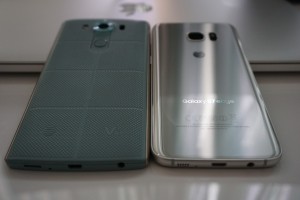 The S7 edge is quite possibly the perfect size for medium to large sized hands, and even though it is sandwiched between two pieces of glass, it doesn’t feel slippery. It gives my achey right hand a break from the beastly V10 and I appreciate that immensely.

Based on looks alone, the Galaxy Silver Titanium S7 edge is simply beautiful. It reflects light in many different ways and takes on an almost mirror-like finish. My main gripe is this phone is a fingerprint magnet and to take pictures of it for this post I literally had to use a towel to avoid creating smudges.

I’ve taken quite a few pictures of the S7 edge and you can view them in a Google Photos gallery by clicking this LINK.

I’ll let the images do the talking for the rest of the hardware category.

If you have used a Samsung device you know what Touchwiz is. There are some cases where Samsung’s skin can be quite helpful, but in more cases than not it is tired. I’m not seeing much change here other than color changes. Most early reports I have read said Touchwiz is toned down, but I have no idea where it is toned down. 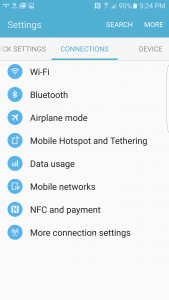 The settings menu is still one of the ugliest and confusing interfaces I have ever seen. Even though the phone is fast out of the box, I can still see the occasional classic Touchwiz lag. It’s tired and old. Scaling back and refining TouchWiz really needs to be the focus in the next iteration of Galaxy devices. 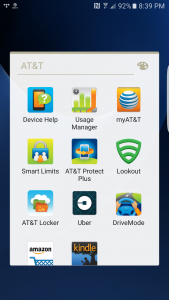 AT&T bloat is ridiculous. There’s an AT&T app and AT&T folder right on the home screen when you boot the phone. And in the app drawer there is a dedicated folder to AT&T even though there are preinstalled apps by AT&T outside of that folder too. It’s out of control.

When I pay for 32GB, I deserve the right to delete these apps and use the advertised storage the way I want. But no, AT&T just lets me deactivate them even though they consume more than a gigabyte of precious space.

I think this carrier bloat is so ridiculous I wish the FCC would step in and ban this behavior. I don’t want one single app from AT&T and it should be an option to install this crapware. 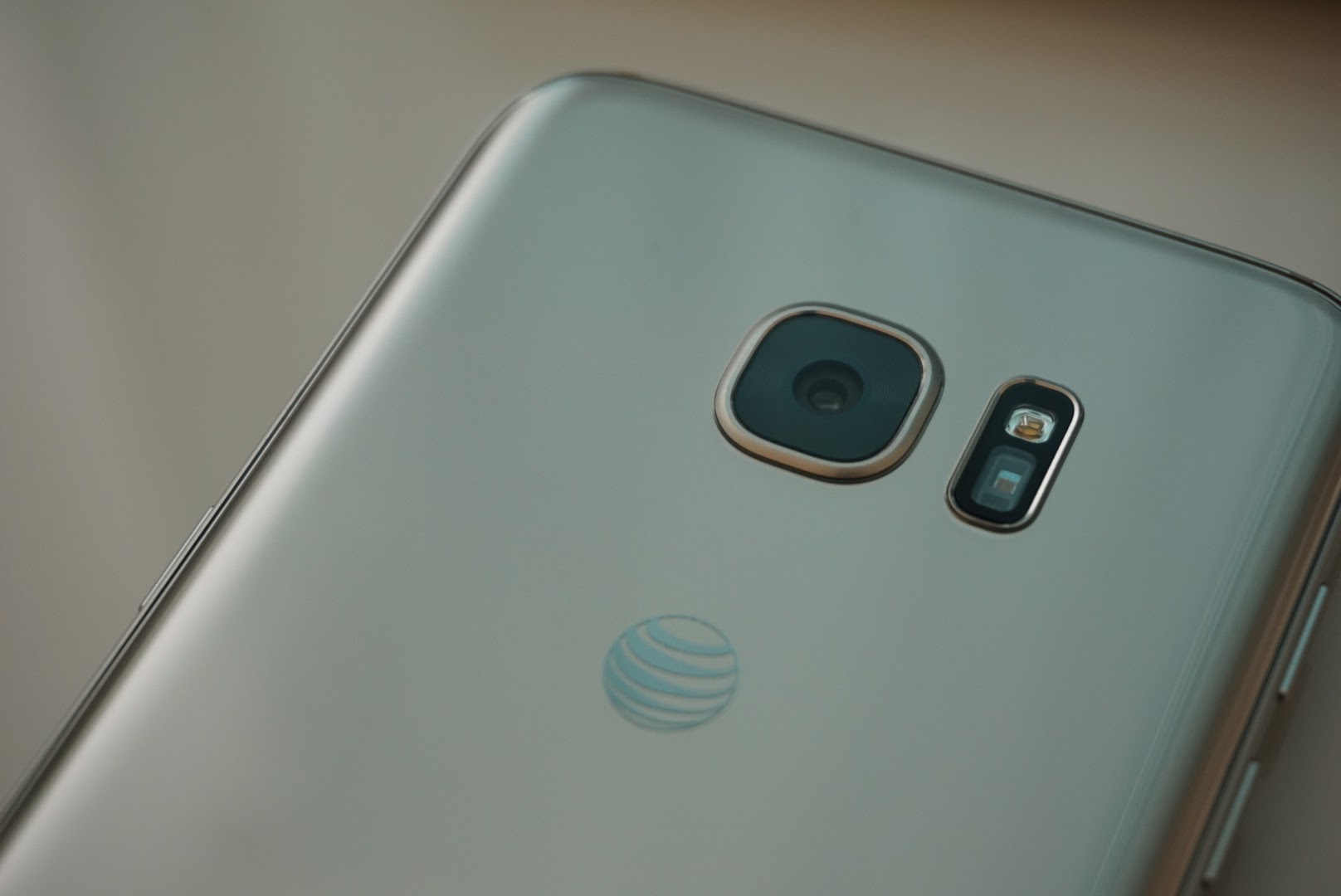 The camera is a scaled back version of what it was last year with improvements. It is now 12MP down from 16MP and supposedly it takes great low light shots. To be honest it does perform quite well in a few shots taken in low light conditions. But this is just a first impressions post, so we will see what the full review will hold.

The camera is fast. Real fast. Blazing fast. It opens in an instant, snaps countless pictures in rapid succession and focuses super quickly. It’s good and I think it will be the camera to beat as an all around camera.

Samsung’s Galaxy devices have owned the best displays since the Galaxy Note 4 and continue to hold that crown. The edge display makes the phone look like an infinity swimming pool as the display simply seems to fall off the sides of the device. 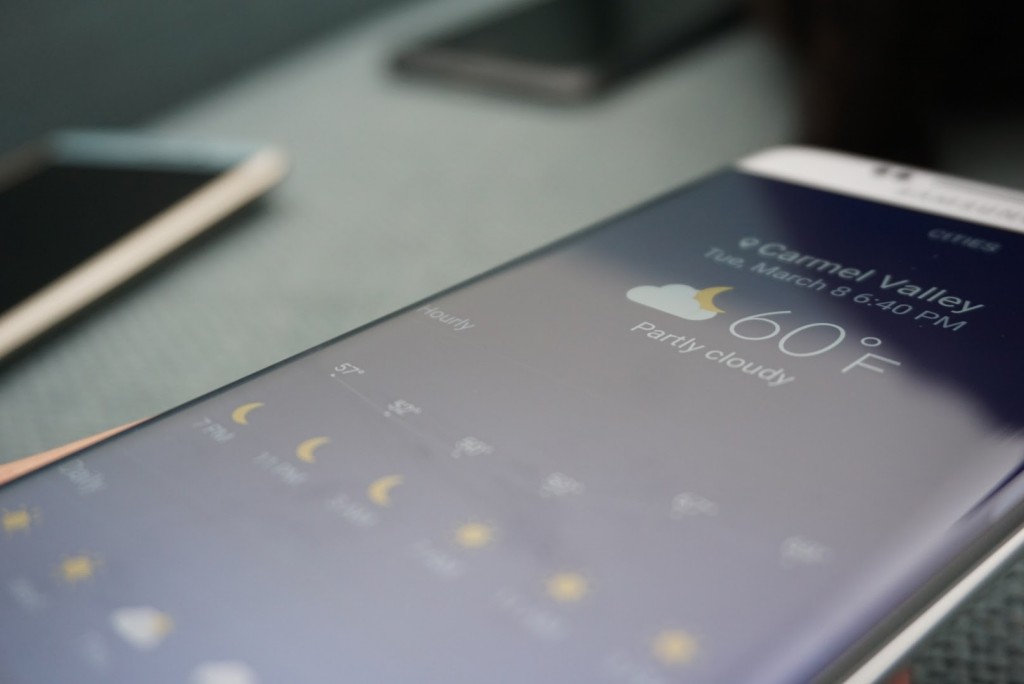 Pixel density, brightness, color saturation and contrast ratio are unmatched. I have no issues giving the Galaxy S7 edge the title of ‘best display’ on phones you can get right now. It just looks incredible and no one can dispute it.

I don’t need to run benchmark tests. Everyone knows the latest Galaxy will always be at or near the top.

The important factor is how does it perform in day to day activities. Beyond the typical Touchwiz lag the S7 edge is extremely fast. But so is the Nexus 6P as well as the Note5, and as much as I hate to admit it, the iPhone 6S Plus is extremely fast too.

The commonality between all of these phones – they’re all expensive. They better be fast for the money you pay for them. So far no matter what I throw at the S7 edge it handles it with ease.

At $794.99 the Samsung Galaxy S7 edge is pricey. It sits atop the price category for 32GB phones. Is it worth it? Personally, I don’t think so especially when you throw in tax this phone comes in at $850. And then you’re probably going to get a case, and insurance so you’re looking at $1k which is astronomical considering the alternatives like the $500 priced Nexus 6P and $350 priced Nexus 5X.

Or if you’re a tech savvy person and have been following the latest trend in smartphones you would know there are other great phones for less than $200 that are fully unlocked. You could buy two or more for the price of one of the Galaxy S7 edge phones.

No these phones aren’t everything the Samsung Galaxy S7 edge is, but they generally perform the same day to day functions. They make calls, send texts, take pictures, browse the web, check in on social media and provide GPS. Do you really need more? We all deserve nice phones but do you have something else to spend $600 on?

You can even get the Nexus 5X for $200 right now if you sign up for Google’s Project Fi. You could get the phone plus a year of service with 2GB of data, unlimited texts and calls for less than the price of a Samsung Galaxy S7 edge. 2GB of data and texts and calls costs $40 per month which works out to $480 for one year, plus the cost of a Nexus 5X at $200 and you’re looking at $680. You would still have $120 left over to spend on anything your heart desires. 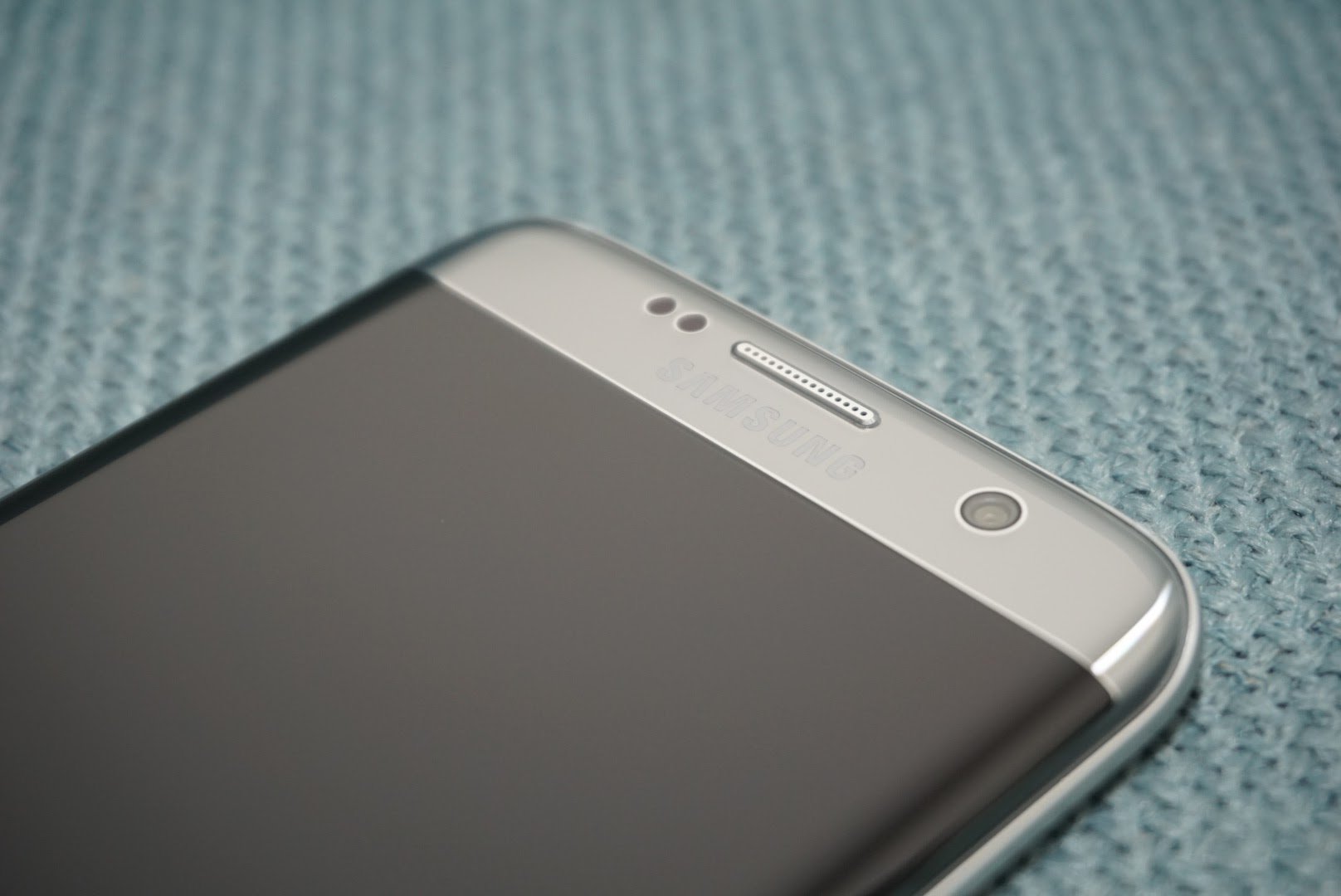 The Samsung Galaxy S7 edge is nice. It really embodies what a flagship is and what it should be. Top notch design, hardware, camera, and best in class display is everything a flagship should be these days. It is drop dead sexy.

I also love wireless charging and forgot how much I missed it when I went to budget phones.

Touchwiz is tired. It needs to go. If Samsung made a Google Play Edition S7 edge with pure Android, I would be all over it. And there needs to be a solution to the fingerprints. The S7 edge just looks gross after an hour of usage.

And even though Samsung brought back expandable memory, they could have given us 64GB as the base storage like LG did with the V10.

$795 is a heck of a lot of money to be paying for a phone these days. I’ll have a full review in three to four weeks time and I will let you know what I think then if I still love and hate this phone. And to spice things up, we are going to have two other editors, Josh Noriega and Matt Adams, give full reviews of the S7 edge since it is the biggest launch of the year for Android. You guys deserve nothing less than our full attention to this phone.