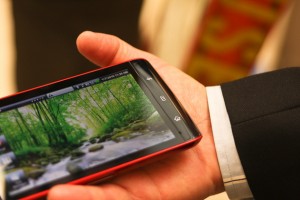 Android seems to be the weapon of choice at CES this year. As the best mobile platform for open source development and modifications, it only makes sense that as many developers as possible would want to get their hands on the OS- and yet, Dell’s Android-powered tablet came way out of left field.

Sporting a 5-inch screen, Dell’s Streak practically defines medium-scale, falling somewhere between an Archos 5 and a myTouch 3G in terms of size, and as Gizmodo puts it, looking like a large iPod touch. While the device isn’t a phone, the inclusion of a SIM-card slot leads me to believe that you’ll be using a cell provider’s data plan for network service, in a fashion similar to the Nook’s AT&T 3G.