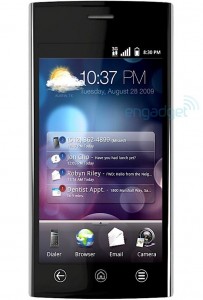 Okay Dell, we get it.  You do have some rather serious plans for Android.  Engadget has scored a doozy of an exclusive this evening by leaking a new Android-based handset from Dell.  Called the Thunder, it’s a counterpart to the forthcoming Windows-Mobile based Lightning.  You’ll have to forgive us if we get drool all over this post.

Cutting to the chase, here’s what you can expect from Dell’s first super phone.  For starters it’s packing Android 2.1 under the dashboard with a new custom UI called Stage.  Judging by the picture tied to the Engadget article it appears to be very stylish and clean.  The Thunder boasts a 4.1-inch WVGA OLED touch screen with curved glass, an 8-megapixel camera, and (wait for it) Flash 10.1 with an integrated Hulu app.  SCORE!

Other features include twitter and Facebook integration, Swype keyboard, and HSDPA/HSUPA connectivity.  According to Engadget, this phone will be sold on AT&T later this year with world-friendly HSDPA versions as well.  An LTE version is slated for “near the end of 2011”.  Boy that sure seems like a far way off.  Let’s hope that they were mistaken with that!