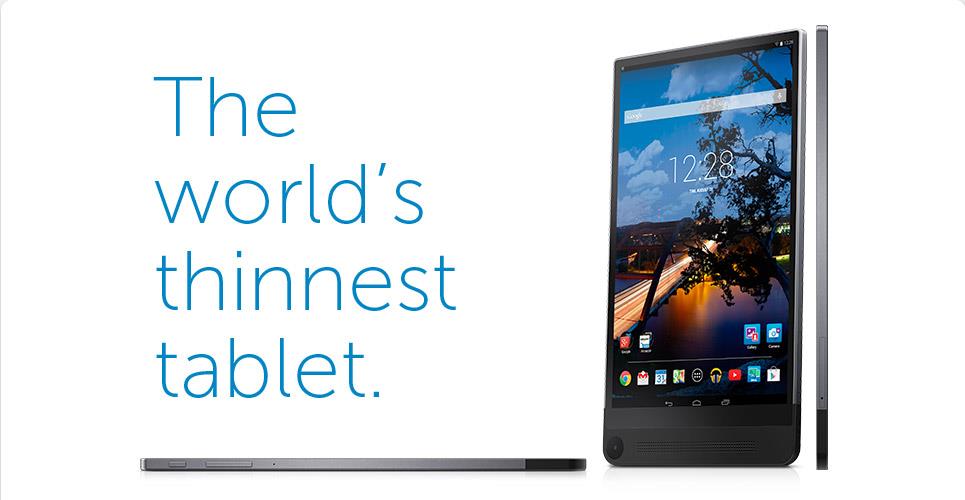 Earlier today at CES, Dell released the Dell Venue 8 7000, which was first shown in September at Intel’s Developer Forum. The tablet is the thinnest in the world with a 6mm thickness, and it is the first with Intel’s Real Sense 3D camera.

The Venue 8 7000 has an 8.4-inch, 2,560 x 1,600p, OLED display, which extends edge-to-edge. Dell calls it an infinity display. On the back, there is an 8MP camera near the bottom. Two 720 stereoscopic sensors above it are Intel’s RealSense Snapshot Depth Camera. The technology is already included in some laptops, but Dell is the first to take advantage of its software with Dell Gallery, a photo manager. The RealSense camera and Dell Gallery together make image post-processing and refocusing easier. For example, you can change the background color of a photo while leaving the foreground subject’s color intact.

Also included in the tablet are a 2.3GHz Intel Atom quad-core processor, 2GB of RAM, 16GB of storage, and a micro SD card slot that is capable of accepting cards up to an astonishing 512GB. An LTE version is in the works. While the device currently runs Android 4.4 KitKat, Dell explains that the update to Lollipop will be available soon. The company also adds that users could update it themselves since the tablet is unlocked.

The Dell Venue 8 7000 will be available in the US and Canada later this week for $399. It can be bought from Dell.com and Best Buy stores. Dell says that the tablet will arrive in Australia, New Zealand, China, Hong Kong, Japan, Singapore, India, Germany, and the UK early this year.