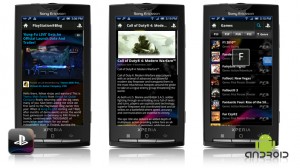 A few new details about Sony’s PlayStation application have surfaced, shedding light on what’s certain to be a top download. As expected, the app will not allow for direct game downloads or playing. At least, not yet. In a move that reminds us of Google, Sony plans to roll enhancements out over time, adding new features as they go.

Initially, the app will function as a basic portal to the PlayStation Network. Users will be able to view trophies and keep an eye on friends with real-time online status. The “Browse All Games” option provides access to a digital guide of PS2, PS3, and PSP games with descriptions and media. The next version of the app will likely add streaming and on-demand video and music.

It’s worth pointing out that we’ve yet to hear anything from Sony PlayStation USA as everything thus far has been from their European segment. The 1.0 release should drop any day now with only a select few countries (UK, France, Germany, Spain, Italy, The Netherlands) able to use the app The 1.1 version (January 2011) will open access up to at least Russia, Australia, New Zealand, Ireland, Portugal, Norway, and Poland. No word on when those of us in the United States will get our hands on the app.

Oh yeah… we thought you would get a kick out of this too… There will most likely be no PlayStation app for Blackberry, Symbian, or Windows Phone 7.