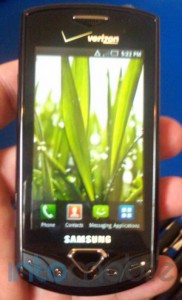 After announcing the LG Ally, Droid Incredible, and Droid X over the span of three months, Verizon‘s Android lineup keeps getting stronger.  Aside from the Droid 2, which still needs a formal unveiling, the nation’s largest wireless provider has their Samsung Galaxy S series Fascinate on deck as well.  Well, let’s add another one to the list, shall we?

You’re looking at what’s being called the Samsung Gem, a 2.1 device with the TouchWiz 3.0 UI on top.  Looking at the picture, we can assume an AMOLED display with a screen size of around 3.2-inches.  You can see the traditional four button layout across the bottom with what looks like an optical trackpad in the shape of a diamond (gem).  According to IntoMobile, this phone will arrive early next month with the Facinate following at the end of September.

Dropping two Samsung phones with a similar interface doesn’t make a ton of sense, but who are we to judge?  Obviously, the carrier knows what they are doing.