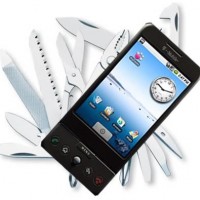 Well,I finally got one, and ended up being disappointed.Â  If you have ever had a swiss army knife, you know how totally unusable they are–you try to get one tool out, they all come out, you try to cut something with the small knife blade and feel like you are a caveman creating a knife for the first time ever.Â  Or you try to cut a piece of paper with the built in scissors and instead cut your thumb in two.Â  The swiss army knife LOOKS good and useful, but it really…isn’t.

I think of this when I look at all the “converged” devices I have owned and keep the ones that keep getting released.Â  Do I really want a camera, mp3 player, movie player, social network interface all attached to my phone?Â  The answer is yes and no, and perhaps you are like me in this regard.

I am an avid consumer of media, I love to listen to music, (Phish is the answer to what I listen to, I am a phan and as such, there are TONS of live tracks to listen to) and I really enjoy watching shows and movies.Â  What I DO NOT like is to be interrupted by things when I am engaging media.Â  For example,Â  I was catching up on Battlestar Galactica using my G1–I would put an episode or two on my card and would watch it when I had some waiting around time–and it seemed like the world picked that exact time that I wanted to watch these shows to call me non-stop. In turn this prevented me from really getting to watch a show all the way through and I found myself having to start the episode over again and again, and eventually gave up.

In addition, it feels to me that the Android platform is trying to be something it is not when using it as a media player, at least on my G1, I cannot speak for the other Android handsets out there.Â  It feels like the handset is trying to be a Swiss Army Phone, and as a result, screwing up my flow.

The marriage of convergence I have found that suits my personality the best is to carry my G1 for all of the Google functionality, but also to carry my iPod Touch as my media and entertainment center.Â  For some reason this does not bother me NEARLY as much to be interrupted when using my iPod Touch and my phone goes off.Â  I also have to admit that the media experience is superior on the iPhone.

I was also that kid who did not like to have his food touching on his plate, go figure.