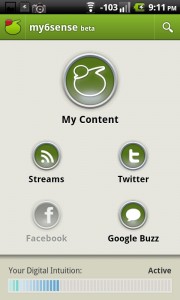 “Unlike other applications, which rely on editorial input, social referrals, or popularity, the my6sense smart reader application intuitively senses what’s important to each user and prioritizes content for everyone as an individual — making content consumption seamless, efficient, and most importantly, personally relevant.”

An iOS version has been available for some time, but be assured, this is no clone. It feels like a true Android app, makes use of the native “Share” intent and includes a widget. My6sense is free and hits the Android Market this morning. Go snap it up and let us know what you think!

Update: The Android masses have temporarily brought my6sense’s servers to their knees, causing server errors within the app. Says something about how our numbers are growing, doesn’t it? The folks at my6sense are aware of the issue, and working to fix it.

The full press release is below.

TEL AVIV, September 2 2010 – my6sense, developers of the world’s first personalized stream reader that uses ‘Digital Intuition’ technology, announced the launch of its Android app, aimed to revolutionize the way we receive and discover content. Extending the reach of the popular program to the world’s fastest-growing mobile platform, my6sense is also the first company to add ranking support for Google’s social sharing network, Buzz. The free Android application is available immediately for download at the Android marketplace.

Unlike other applications, which rely on editorial input, social referrals, or popularity, the my6sense smart reader application intuitively senses what’s important to each user and prioritizes content for everyone as an individual — making content consumption seamless, efficient, and most importantly, personally relevant.

One of the major features that enhance this approach to more efficient contentis a dashboard widgetwhich dynamically surfaces users’ most valuable informationnuggets. This gives users ‘Instant Intuition’ – immediate access to view their most-relevant content and updates directly on the home screen of their Android device.

Additional killer features include: a main channel displaying the user’s most important updates and content from all sources (news, RSS, blogs and social streams), streams of personalized top content which users can view with just one click from Social Networks such as Facebook and Twitter, fresh content packages from a wide array of topics and a search tool. On top of that, users can share items directly from the app, and there is no limit to the number of feed subscriptions one can have – as my6sense’s intelligent personalization engine can take on the challenge of information overload, surfacing the very best and most relevant content.

Moreover, my6sense is delighted to announce that the application offers support for Google’s new social network, Buzz, leveraging the service’s powerful API. The result is the first application in the world to prioritize Google Buzz entries, doing so in a clean and intuitive way for the mobile device.

As the world of information morphs from a web of static pages to real-time streams, my6sense’s groundbreaking digital intuition technology tames the vast amount of information cluttering news feeds and social sites. The application’s hyper-personalized streams allow users to focus on the content they want to see, at the right time and in the right context. The company has enjoyed significant success with its iPhone application, and is excited to join the millions of smartphone users who have made Android their choice for mobile computing.

“my6sense’s digital intuition technology discovers the finest nuances of your preferences and behavior — and makes sure the right updates, ideas, insights, and news will find you when you want them most,” said Barak Hachamov, Founder & Chairman, my6sense. “Android customers have made their platform choice to avoid limits on what they can or cannot do with their phone, and we too want to avoid limiting your experience to traditional streams based on time or simplistic filters.”

Personalization is claimed these days by few content curation tools and social streams. The majority of these tools base their rankings almost entirely on global and socially-local popularity of the information. Instead, my6sense views various popularity factors as only one piece of a very complicated puzzle that forms individual preferences of each one of us. In fact, the importance of popularity may significantly vary between the users, and even for the same user in different contexts. Focusing on true personalization of information delivery, my6sense intelligently (and transparently) considers each user’s natural information consumption behavior to truly understand what and in what context that user would like to see first.  As a result, the personal “Digital Intuition” agent of each user at my6sense learns to mimic the human ranking function of its owner, providing him with an enhanced content experience.

In addition to the company’s new Android application and existing iPhone application, my6sense recently announced their Attention API. The API allows developers to harness my6sense as a customization engine, personalizing their content stream for their users. The new wave of social recommendation feed readers, for example, could offer hyper-personalization. Two companies leveraging my6sense’s personalization service include a business social networking site in the UK and the largest mobile operator in Israel.