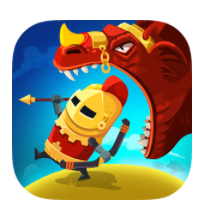 This review was done in conjunction with my nine-year-old daughter. She provided her own perspective apart from mine in order to show how both children and adults perceived the Google Play game Dragon Hills.

Dragon Hills is an endless-runner style game from Rebel Twins that allows you take control of a raging dragon in a revenge mission against the mischievous knights of the land. Simple controls paired with overall basic gameplay mechanics are at heart here. My daughter recommended this game and I was so surprised by the initial presentation and gameplay from the start so naturally, I had to play (and learn) more.

Dragon Hills smartly integrates the endless style running that’s become so popular on smartphones with a hefty amount of upgrading and collecting. My daughter really enjoyed the upgrading aspect–she was always looking for the next power-up. Dragon Hills allows you the ability to upgrade by spending coins within the game, which are accumulated throughout each level during gameplay by collecting or by using real-world money to purchase coin packs.

The gameplay within Dragon Hills is so simple that it’s instantly fun. Controlling the dragon is similar to other games of this genre, but instead of having the dragon jump or fly from screen presses, he instead dives down onto, and even under, the ground. As your dragon continues on his wrecking rampage, he’ll destroy things in his path, collect coins, eat animals and knights, as well as bust through barricades, trees, and rocks. The goal is to navigate carefully through each level by avoiding deadly obstacles and collecting as much loot in your destructive path as possible.

As you gain coins by playing through the levels, you’ll learn new tricks and how to efficiently navigate through the game world. The coins you gain can be used to spend in the shop for upgrading your dragon’s abilities and armor. More than once my daughter asked if she could just spend real-world money to upgrade, which I guess is what the developer essentially wants in a game like Dragon Hills.

My daughter and I both had a lot of fun playing Dragon Hills (even without investing any money). We would often watch each other play to discover new techniques and my daughter would always check to make sure she stayed ahead of me in the overall progress. The challenges in Dragon Hills aren’t necessarily designed for multiple players, but playing on two separate accounts naturally brought forth some fun challenges.

Dragon Hills has art that is incredibly inviting. The characters are drawn and animated in a way that’s clean and distinct. My daughter really likes the way the dragon causes havoc and the way characters within the environment reacted. She was always amused by the crazy sound effects and goofy animations that play throughout each zany level. I found that the overall presentation was spot-on and only interrupted by the occasional, annoying advertisement.

Music and sound effects are much better than your average Google Play game here. I really felt engrossed in the experience while listening to the tiny humans scream for their lives as the crashing sound of their homes echoed from my little mobile speaker. The catchy tunes accentuate the action as they play in the background–it’s mostly memorable fare without being annoying in a way where it’ll get stuck in your head for days.

The environments in Dragon Hills are great eye candy. As you drive your dragon through each level and cause havoc and destruction, you may notice objects Domino and bounce dynamically with everything in the playable game space. It really is neat to watch the interactions play out. There’s a lot going on here with the dynamic weather effects, particle effects, animated characters and multiple interactions.

Rebel Twins did a fine and dandy job of packaging Dragon Hills as a worthwhile presentation in so many respects. The entire game is filled with character: in music, art style, sound effects, and animation–something I’d expect from the likes of EA or Ubisoft but not necessarily a smaller indie studio. Simply marvelous.

In closing, Dragon Hills is a wonderful game that creates an enjoyable experience by allowing the player to fully control a maniacal dragon in his quest for vengeance. The whimsical nature of the game perfectly blends this quest into a light-hearted venture that anyone of any age can truly enjoy. Although the premise remains simple, the level design and pick-up-and-play controls had me and my daughter returning for more at nearly every opportunity. My daughter played even more than I did as she was always looking to upgrade as much as possible and complete the next mission.

If you like humor, flare, and pure, entertaining gameplay in your mobile games, you really can’t go wrong with Dragon Hills. Precision control is what allows gameplay to come to the forefront in every step of the way as you guide your dragon through the wonderfully created and magical hills of the kingdom. We had so much fun with Dragon Hills that we recommended it to family members and friends alike.