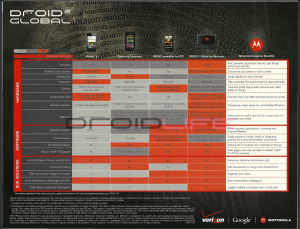 This is sad news. Okay, maybe “sad” is too strong. “Bummer” is a better word.. We can’t say we didn’t see this coming, but it still (kinda) hurts. Reports are coming in that the Motorola Droid 2 has been discontinued at Best Buy stores, and it’s about to be replaced by it’s younger, worldwide brother, the Droid 2 Global. Keep in mind, this doesn’t mean that the Droid 2 has been discontinued by Motorola. It  just means that Best Buy retail stores and BestBuy.com won’t be selling it anymore. They’ve taken favor with the Global version, and honestly, who wouldn’t?

We thought that the D2 Global would be launching in black and white, but we’ve  learned that it’s set to come in Dark Sapphire and Winter White. Well, at least we got the white part right. If you haven’t heard of the Global D2, it’s packing a 1.2GHz processor, a 3.7-inch, 854×480 resolution screen, Dual Band CDMA, Quad Band GSM, Tri Band UMTS, 8GB of internal storage, Froyo, Adobe Flash 10 support, and a 5MP auto-focus camera with a dual LED flash. Pretty impressive, no? The D2 Global is rumored to be launching on November 11th, but we’ll keep you posted if that changes. Anyone excited for this device? Anyone going to get one just so they can say “I have a Dark Sapphire-colored phone”?