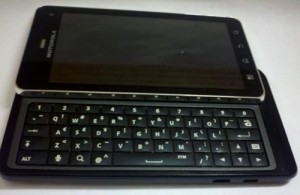 Additional details for the Motorola Droid 3 have surfaced online, indicating a nice all-around bump is in store for Verizon’s iconic handset.  The touch screen has been rumored to be a 4-inch qHD  display, bigger and higher resolution than its predecessors.  This has been confirmed by a TechnoBuffalo source who also adds that Motorola has indeed managed to squeeze a fifth row into the keyboard, providing a dedicated number row.

Additional details for the Droid 3 include an 8-megapixel camera on the back with a front-facing camera for video chat. Resolution is unknown at this time, but we’re hoping for something around 2.0-megapixels.  One notably absent feature is the lack of 4G LTE support, something which Verizon is really pushing as of late. Maybe that’s something more appropriate for a Droid 4. Droid 4G. See what we did there?

The processor is expected to be a dual-core platform, however the exact brand and type is not yet known. Some are hearing NVIDIA Tegra 2, but it’s entirely possible that Motorola could stick with their friends at Texas Instruments, using the OMAP chipset.

TechnoBuffalo is hearing Verizon has the Droid 3 lined up with a release some time in June and we see no reason to argue here. This would put a few weeks space between the Droid Charge, Xperia PLAY and Droid X2, and give customers some breathing room after a string of excellent offerings.