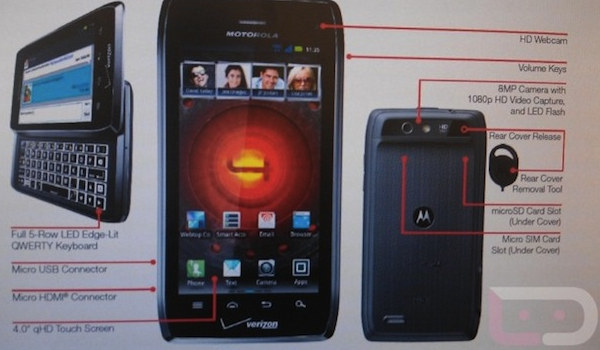 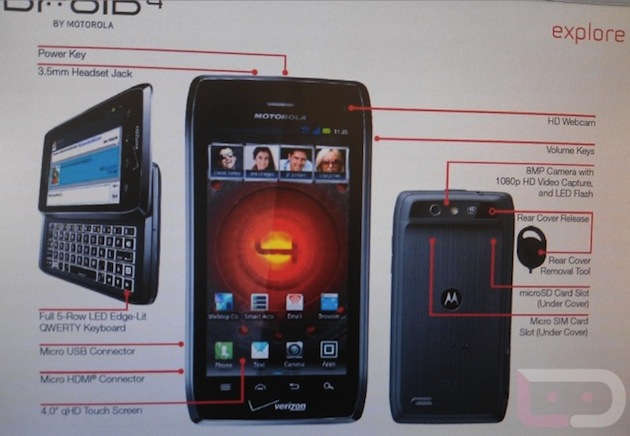 Verizon and Motorola have had a very busy fourth quarter together, having collaborated on no less than three top-tier Android-powered smartphones.  First we had the Droid Bionic arriving months later than initially expected and only weeks after the Droid 3.  Jump forward another few weeks and then we have the Droid RAZR slashing its way into the lineup and contending for best of year honors.  What’s next?  How about a Droid 4 less than one month after that?

Droid Life has gotten wind of the specifications for the latest Motorola and Verizon smartphone and have been only too kind to share the details.  According to their findings, the Droid 4 arrives in just over a week on December 8th and should feature some serious firepower.  Looking very much like a Droid RAZR or Droid Bionic with a 5-row sliding QWERTY keyboard, the Droid 4 has nearly everything a top notch Android should have.  Nearly.

The Droid 4 should feature:

Save for Ice Cream Sandwich and a 720p display, we are having a tough time finding a flaw in the Droid 4.  Then again, one of these should be fixed before long. And really, we’ve never really had a problem with qHD displays anyhow.

The Droid you are looking for?

Is this the handset you’ve been holding out for or is there something else you’ve got your eye on?