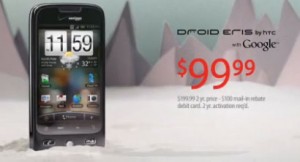 Not to be deterred by a lawsuit, Verizon is still going hard on Apple for their network, or lack thereof.Â  The most recent example come from a commercial featuring the Droid Eris handset.Â  Android aside, the spot is a rather clever one.Â  The iPhone arrives on the Island of Misfit Toys and the others can’t figure out why.Â  It’s not until the iPhone… well, we’ll let you see.

Let’s just say it’s yet another zinger that points out the fact that apps aren’t everything.

The commercial is definitely not based around Android or any specific handsets.Â  The Droid Eris and HTC Imagio take a backseat to the zinger.Â  Still, it’s a comforting feeling to see another Android device on television.