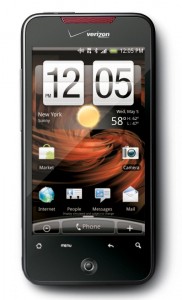 Around a week back, it was rumored that the Droid Eris and Droid Incredible were on the fast track for extinction.  While most were of the opinion that the Incredible was simply too new to get killed off, the Droid Eris made sense.  It’s nearly eight months old now and it simply doesn’t hang with Verizon’s other Android offerings.  The word was that the Incredible being discontinued was for a specific SKU (without 2GB microSD card).  Today we’ve received word from one of our Verizon guys on the inside who passes the following along:

“…they are allowing customers who pre-orded it (Droid Incredible) to cancel their order and get the Motorola Droid X instead.”

It would really be a shame to see such a great phone fall by the wayside so quickly.  There have been plenty of shortages and back-order problems plaguing the device since pretty much day one.  Maybe this makes more sense to the powers that be?  Droid Life also doesn’t buy the new SKU situation, adding that this already happened a while back. 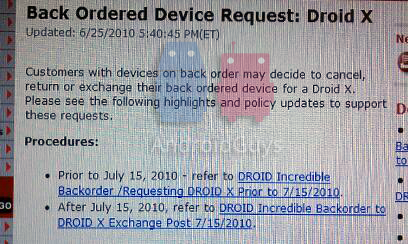 Mercy killing for the once mighty Incredible?  If so, this would be the shortest life span we’ve seen for an Android device so far.

UPDATE: Adding to the confusion is the recent news that HTC has opted to use Sony screens for the Incredible while the Samsung works through the AMOLED shortages.  Maybe the cancellation/re-order policy is only in place until things get straightened out.

UPDATE 2: To clear up any confusion or accidental implications, Verizon has offered the following official stance.

“The Droid Incredible by HTC, as you know, definitely lives up to its name and is a fantastic device.  It has proven to be very, very popular with our customers. Should a customer who has ordered a Droid Incredible decide that the Droid X (or any other device) better meets his/her needs, he/she can take advantage of the Verizon Wireless Worry Free Guarantee and choose the Droid X when it goes on sale July 15. Customers cannot pre-order the Droid X with us.”