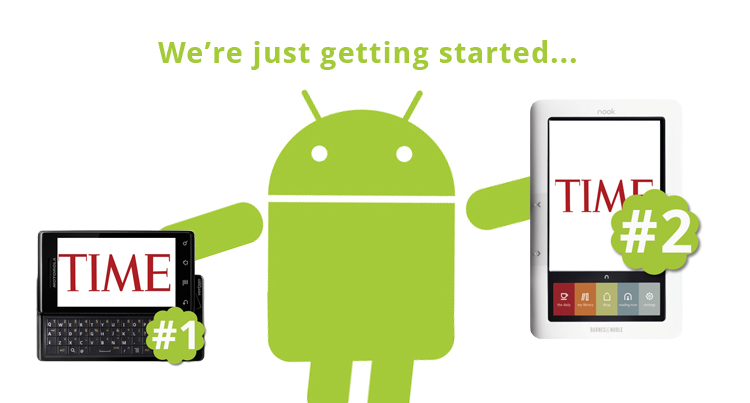 As if we needed more credibility to Android or the Droid specifically.Â  Motorola’s signature handset has topped TIME’s annual list of gadgets for 2009, saying this marks “Android’s first credible challenge to the iPhone”.Â  Huzzah!Â  Validation feels good, but so does getting to say “I told you so!”Â  I know Android is capable of more than other phones, but getting big companies on board seemed like a huge undertaking.Â  In all honesty, I would have expected to see the iPhone 3GS at the top off the list. That’s just how lists like this generally end up.

Android actually lands in the top 2 spots if you count the Barnes & Noble nook.Â  And yeah, we count it!

Everybody likes Android, Google’s open-source smartphone operating system. But a smartphone operating system isn’t all that satisfying without an actual kick-ass smartphone wrapped around it. Now Android has one: The Droid is a hefty beast, a metal behemoth without the gloss and finish of the iPhone, but you don’t miss it. The Droid’s touchscreen is phenomenally sharp and vivid, it has an actual physical (not great, but good enough) keyboard, and best of all, the Droid is on Verizon’s best-of-breed 3G network. It’s Android’s first credible challenge to the iPhone.

How many gadgets will Android be running next year?