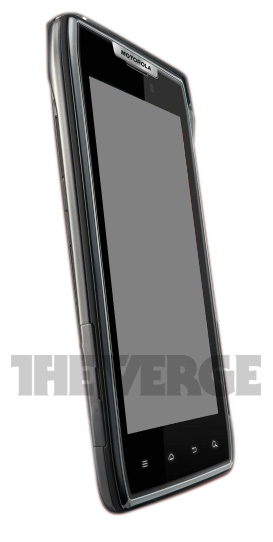 We’ve been hearing rumors about Motorola possibly reviving the RAZR line, and now, thanks to the guys over at This Is My Next, the rumors are becoming truth, and that truth appears to be a Motorola Droid RAZR set to hit Verizon this holiday season. The Droid RAZR isn’t the first name this device has encountered as we have seen it under other aliases such as the Droid HD, and Motorola Spyder. If the tipsters over at TIMN are correct, then Verizon customers are going to be treated to yet another Droid assimilated dual-core, 4G LTE behemoth.

The Droid RAZR looks to be one tough Droid, wearing both Gorilla Glass and Kevlar casing. I’d be going that extra mile to protect the first 4.3″ 960×540 qHD Super AMOLED beauty too if I was them. Now don’t go assuming this tough exterior is over compensating for a small chipset, as the Droid RAZR is set to be packing an unspecified 1.2GHz dual-core CPU, 1GB of RAM and an LTE radio. The cameras on the RAZR are pretty impressive as well, with an 8MP camera with 1080p video recording and image stabilization, and an “HD” front-facing camera. It’s also looking to be compatible with Motorola’s Webtop software and lapdock making it a true workhorse for the blogger on the go.

There’s no information yet on what OS the Droid RAZR will be running but they’d be smart to launch it with Ice Cream Sandwich if they’re looking to entice us holiday shoppers. It’s also completely possible that the device won’t launch until after the holidays but we’re hoping on the former to be true. So what do you think? A great device to bring back the RAZR name or should they have stuck with the Droid HD or Spyder? Give us a shout in the comments below.

Source: This Is My Next