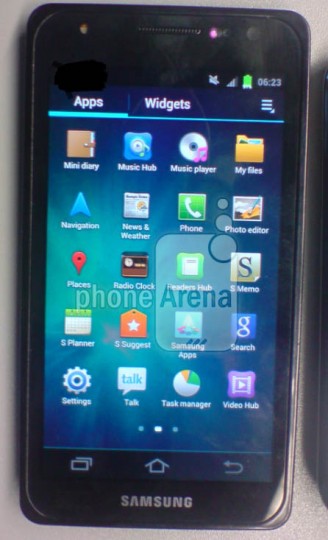 While all eyes are focused on the Galaxy SIII, it seems that it’s not the only device Samsung will be launching. A new Samsung device has been leaked by PhoneArena, and they’re calling it the Samsung GT-i9300. The device was actually leaked back in February with some minor details, but the photo above was just recently discovered.

Rumor has it that we’re looking at a mid-range phone that will most likely launches as the Samsung Galaxy M, the M representing “mid-tier.” It will feature a 1.4 GHz dual-core Samsung Exynos processor, 1GB of RAM, a 4-inch 720p HD AMOLED display with a 1026 x 600 resolution, and Ice Cream Sandwich. According to GSM-Arena, the Galaxy M will be dropping sometime in May. Of course, there’s been no confirmation from Samsung yet, so we’ll just have to take this with a grain of salt for now.

So who’s interested in this device upon first glance? Anyone holding out for the Galaxy SIII? Let us know in the comments!