If you have an interest in your privacy – and, let’s be honest, you really should – then this information from the Electronic Frontier Foundation should be of interest to you. According to a recent report from the EFF, Google has ranked as one of the highest in a slew of public companies when it comes to how they protect their users. 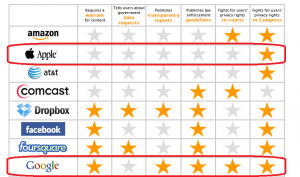 According to the report, Google received marks for:

Other companies did score higher than Google; for example, Twitter and Sonic.net received marks in every category. Other companies, however, such as Verizon and MySpace, received no marks in any areas at all.

Be sure to hit the source link for the full report, and let us know your thoughts in the comments.