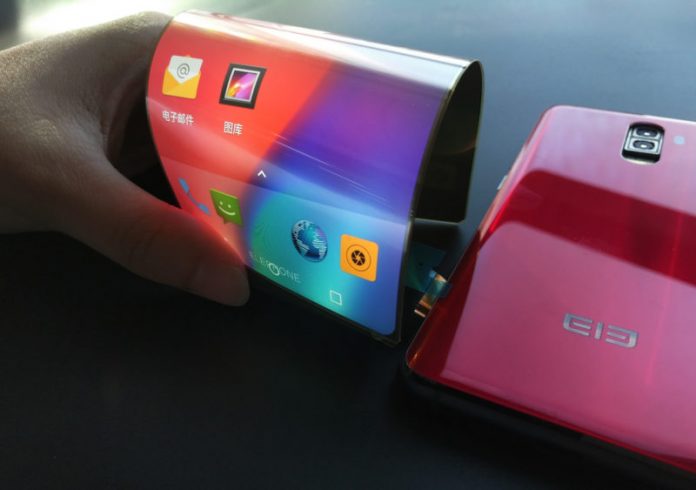 As far back as 2015, Samsung was rumored to be working on a smartphone with a curved smartphone. Two years later, the phone has yet to materialize although the recent emergence of a support page for the device known as the Galaxy X on Samsung’s official website seems to suggest that its launch is imminent.

But an obscure Chinese smartphone maker might actually beat Samsung to the punch. The company called Elephone has built a reputation for copying the designs of famous smartphones. For example, its S7 flagship was inspired by the Galaxy S7, while the S8 has a distinct Xiaomi Mi MIX vibe.

Well based on a few leaked images and a video, it seems Elephone is hard at work experimenting with a new smartphone design based around a flexible display. If this information is correct, the company’s next-gen S9 flagship could actually launch as an affordable Galaxy X alternative. Assuming Samsung’s phone makes a debut first.

Interestingly – for a smartphone coming out of an obscure Chinese brand – the Elephone S9 is said to take advantage of a Snapdragon 660 processor, not a MediaTek SoC, as you’d normally expect. Apart from that, the phone will apparently feature a bezel-less 18:9 display, as well as a 6GB of RAM and 64GB of built-in storage. Android 8.0 Oreo will ship on board of the device.

Sources familiar with the matter also claim the Elephone logo on the back will act as an LED notification light, while one of the leaked images reveal a dual-camera setup will live on the back the phone.

Based on the current evidence, we really can’t be sure how the final version of the phone will look like. Chances are the Elephone S9 will be different than the Galaxy X which will quite possibly fold in half akin to the ZTE Axon M, which isn’t actually a smartphone with a flexible display, but one that pairs two displays uniting them with a hinge.

It doesn’t appear the Elephone S9 will be able to do that, but who knows. There is no known time frame for the phone’s release, so it’s safe to assume it won’t be coming before the end of 2017.