In the green corner, we have Spotify, founded in 2006 with 100 million downloads and an average user rating of 4.5

In the red corner, we have Slacker, founded in 2006 with 10 million downloads and an average user rating of 4.2

Spotify is decked out with a sleek, black interface and incorporates a gradient consisting of dark gray and Spotify’s green accent. The user interface is charming and simplistic – Spotify has done an excellent job at using Google’s Material design guidelines, but manages to keep their application feeling unique yet familiar. Navigating between menus of Spotify is effortless, and the icons are refreshing after seeing so many stock icons, or poorly designed low-resolution graphical icons. It’s gratifying to see that Spotify paid attention to the intricate details to create an appealing user interface (UI) that simply works.  Browsing through the interface gives me a bit of nostalgia as it brought back good memories of going to music stores. The album art work is captivating and brings on a good feeling.

Spotify looks beautiful visually, and its ease-of-use creates a great user experience. But Spotify is packing a mighty flaw that was exposed previously in its battle vs Songza. Namely, when a song is playing and you navigate to other menus at the bottom, a footer-like menu displays the song. Additionally, it shows playback buttons here, too. This directional arrow is, at times, extremely difficult to touch adequately; the lack of tactical feedback doesn’t help, either.
Also, with Spotify’s UI being more in line with the Google’s design standards, users shouldn’t have to tap the arrow. We should be able to slide it down or up. This takes away from a well thought out and executed application.  As it is, we spend too much time needlessly pressing buttons.

Due to this flaw, Spotify suffers point deductions and scored an 8 for round 1.

Slacker’s user interface is superbly designed; the homepage of Slacker has a blend of white and variations of gray triangles creating a high-resolution wallpaper-like background. The header and footer menus of the app are a hue of deep blacks that, when viewed against the wallpaper background, gives the application a beautiful and monochromatic design.

Slacker’s ‘Now Playing’ menu is drop-dead gorgeous. The ‘Now Playing’ menu stands out like a magazine centerfold displaying the current song’s album art while behind the cover art is a background of the same cover art just with a low opacity giving a sleek appearance. That combined with the creatively designed play, skip, and back icon buttons create an aesthetically appealing design. Switching between Slacker’s menus are hidden gems. The ‘gems’ are creative transitions that flip, flop, and fly around like slides of a PowerPoint presentation. The snappy transitions, intuitive menus, and crisp, rock-star like graphics allow Slacker to have a bit of swagger.

Spotify’s strong suit is its multitude of features that it packs. Starting off with the app it has a strong library of music selections. The ‘browse’ menu is the homepage that begins your musical journey. The menu also has pre-populated genres and moods to search from ranging from chill, edm/dance, pop, workout and more. It also has a nifty section that shows you today’s chart hits, new releases, and discover. The ‘discover’ section is extremely useful because once you have been using the app and have liked music, it offers you similar artist recommendations that are usually spot on for your musical taste.

My personal favorite of Spotify is the ‘your music’ menu. In ‘your music’ the menu is broken down into the following: playlist – it is a custom list that you create from your own music selections. You can also follow other user playlists if you don’t want to take the time to create your own. Songs – is a list of all the music you have saved to a playlist in one section. Albums- what’s great about the Album section is where Spotify really flourishes, as this section allows you to save whole albums from your favorite artists and you can listen to the entire album anytime you want.

Like other streaming services, Spotify does allow you to discover music. This can be done by following a particular artist or by using its Radio feature where you pick the artist you want to listen to and Spotify will play that artist’s music along with like music from other artists. What I don’t enjoy about the Radio feature is the same songs being played repeatedly.

Offline mode and uploading your own music library to Spotify are two additional features that make Spotify a juggernaut. Offline mode allows you to save songs and albums to your device, so that when you are in areas where you do not have a network connection, you can still listen to your favorite music. It also has a toggle switch for each playlist or album allowing you to further customize what music you really need saved to your device.

Uploading your own music library is awesome.  Even with two years of using Spotify, they still don’t have some of my favorite songs. What I have noticed is that for the most part music singles don’t become available until the entire album is available.

The features highlighted above are primarily for premium subscribers. The free version of Spotify is extremely limited as you will be unable to listen to full albums and create your own playlists without the premium subscription.

Slacker is a discovery and on demand service which for the most part, is relatively unknown compared to other heavyweights in the music streaming business. Although Slacker seeks to change that by giving you everything.

You do have the ability to listen to curated playlists from genres, moods, seasons, etc. Although Slacker Plus and Premium do boast a music library of over 2.5 million songs. The paid version also gives you control over creating a playlist, and saving songs offline  when there is no available internet connection. Two more amazing features are the ability to listen to entire albums and search for specific song titles.

Spotify premium version: $0.99 for the first three months then $9.99 per month removes ads and limits

After 3 rounds of throwing blow after blow between Spotify and Slacker, we have to take it to the judge’s score cards.  It was an intense battle, but Slacker prevails with a score of 27 points compared to Spotify’s 25.5

As much as it pains me to report this, down goes Spotify. The battle boiled down to the design differences. The Slacker team designed a drop-dead gorgeous application that is appealing, easy to use, and the menu transitions make navigation captivating. Spotify is still an amazing and well designed app with an abundant music selection but ultimately wasn’t as good as Slacker.  Slacker wins a close one.
Tell us what you thought about the battle by leaving comments below. Which streaming music app do you use? 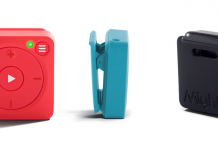 Spotify adds a sleep timer to its app; here’s how to turn it on