Slacker has surprised everyone here in making it to the final round of Epic App Battles of Android. I think that even the folks at Slacker were surprised. With only 2 votes in our reader poll, I think that it’s safe to say that Slacker is the underdog in the competition.

Google Play Music, however, comes into the competition at the top spot in our reader poll with 54% of the votes. It’s no wonder that it’s made it this far. So without further ado…

Who will win in this Epic App Battles of Android?

Google Play Music uses Android’s material design. If they didn’t we’d be shocked. It’s Google after all. That makes for a very familiar interface that doesn’t require you to spend any more time trying to find your way around than you need to. When you first open the app, you’ll be greeted by the exact same interface found on their web portal, just resized for smaller screens. This makes it very easy to transition from the app to the web portal and vice versa. The color scheme is very light and clean. Personally I like the darker color scheme of Slacker better. It would be nice if Google would give the consumer a couple of themes to choose from.

When you first open the app you are greeted by some automatically generated playlists. This is a feature that they brought in from their Songza acquisition last year. Songza’s streaming service, of course, still exists. In fact, it went head to head with Spotify last week. Even though it lost the battle, its automatic playlist feature is pretty cool and it really helps Google Play find you some music that you want to listen to quickly.

Right below the playlists are the recently listened to stations.

Slacker takes a completely different approach to their UI from Google, but they have a similar feel in the way that you navigate through the app. This is important because Google has a very easy to use interface and so does Slacker. However, Slacker’s UI takes that familiar UI and adds lots and lots of eye candy. Most of the eye candy isn’t any more functional than Google’s UI, but it it so much cooler to look at. To me, this is a huge wow factor.

The elements that differentiate Slacker’s design from that of Google’s are transitions, animations, and a darker color scheme. The color scheme is not as dark as Tidal’s or Amazon Prime Music’s UI. It’s a nice blend of dark and light. The transitions and animations are also very nice.  One of the things that I love is that when you scroll downwards on the page, the headers shrink to make a little more viewing room on your screen.

Slacker has done a great job branding the app. Instead of using Material Design, they took the elements that made sense and combined them with their own unique UI to make a great user experience. From the buttons to transitions to animations this app has by far is the best-designed app of the bunch, If we were to stop the battle here, then Slacker would be declared the winner. However, we still have two more categories to grade. Google Play Music comes to the table with some pretty strong features. As I mentioned in previous Epic App Battles of Android, one of Google’s strongest features is its enormous catalog. With over 30 million songs to pick from, I was able to find the most obscure music that I could think of. I even found a relatively unknown Salvadoran band called R.E.D.D.. They are very well known in El Salvador, but not so much in the rest of the world. Every song and every artist I looked for, I found. To me, that is a huge benefit of a streaming music app.

Another nice feature of the paid version was that when you listen to a song that has a music video on Youtube, there will be the option to watch the music video. This is more of a novelty than anything. I usually listen to music while I am otherwise occupied with another task, which makes it difficult to enjoy this feature. It’s more of a cool feature to show your friends. Also, the video doesn’t open up in the native Youtube app, where you could cast it to your TV. It instead opens in a player within the app. To be fair, you can still open the video in the Youtube app, but it’s not intuitive. Slacker does not feature music videos

Chromecast support is another feature that you’ll find on Google Play. If you want to play your music on your television, you can with the Chromecast. Technically if you have Youtube on your TV or other streaming device, you can open the video in the Youtube app and cast the music video to other non-Chromcast devices.

One of the best features of Google Play is that you can upload 50,000 songs from your own music library. You don’t need to subscribe to the premium service to enjoy this feature either.

Another feature that Google Play has is the ability to filter explicit results from radio stations. As a father of 3 children, this is especially important to me.
What we like about Google Play Music

Slacker has a relatively small catalog of 12 million songs when compared to Google Play’s 30 million song database. Don’t get me wrong 12 million songs are nothing to scoff at, it’s just that Google has more than twice the available music.

It seems that Slacker is aware of their shortcomings and offer several unique features not found on other services. For one, Slacker offers over 300 expert-curated radio stations. For another, many of their radio stations are DJ’ed by professional DJ’s. This gives you more of a traditional radio feel without the commercials, provided you are paying for Slacker premium. Another option that they have is to interject your music with headline news and sports updates from ESPN. Again, this gives Slacker a more traditional radio feel. The best part is that if you change your mind and want to listen to the next song, you can skip the spoken word and move to the next song. This may or may not be a benefit to you, based on your tastes, but it’s there if you want it. 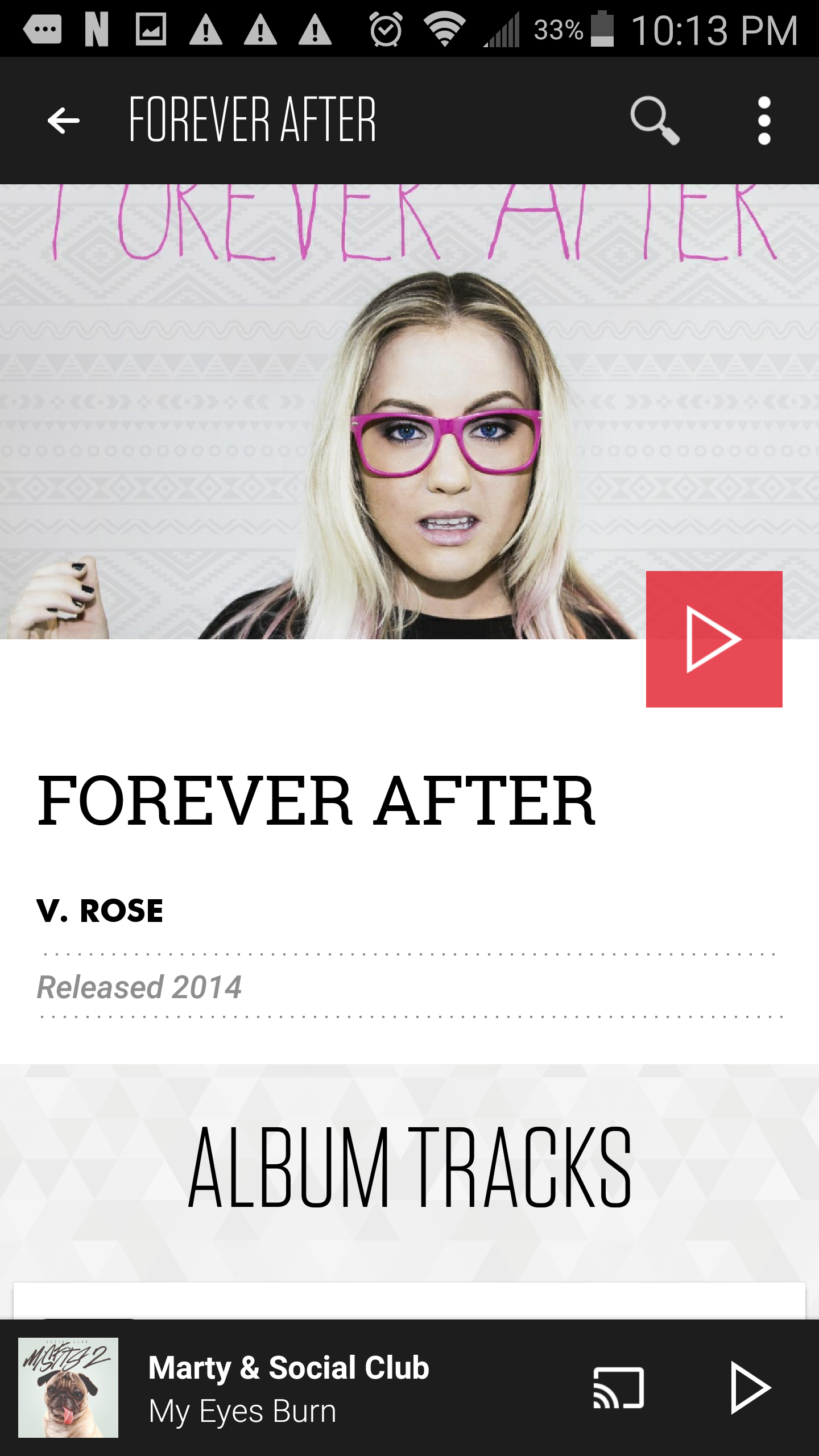 Google Play Music offers both paid and free tiers. The free version is essentially Songza with Google’s UI. You get unlimited ad-supported music streaming with 6 skips per hour. Chromecast support is included.

The paid subscription will give you offline play, unlimited skips, and no ads. You can watch music videos for many of the songs, as well as play specific songs and albums. It costs $9.99/month and you get a free 30-day trial.

Slacker has 3 pricing tiers. They have a free tier and like Google’s free tier, you can not listen to specific songs, but you can select from preset radio stations.   You get 6 skips per hour. Their second tier is Radio Plus. This is basically the same as the first tier, except you get unlimited skips, no ads, and offline listening. The cost is $3.99/month if paid on a yearly basis or $4.99/month if paid monthly. Their premium tier gives you everything from the first two tiers, with the additional of custom playlists and the ability to listen to specific songs and albums. The cost is $9.99/month. They offer a 7-day trial.

With 45% of the popular vote in our user poll, Google came into this Epic App Battles of Android as the crowd favorite. It would seem that their preference was not without merit. However, Slacker came into the battles with the best UI of all our contenders. They also had some killer features and flexible pricing plans.

Slacker really was the underdog in this fight. They surprised everybody by taking out Pandora and Spotify, two of the largest juggernauts in the competition.  In the end, it wasn’t quite enough to take the title.

What do you think? Do you agree with us? Who do you think should have won this Epic App Battles of Android? Let us know in the comments.

If you’d like to take a look at the other battles you can check out the Week 1 and Week 2 summaries.