Welcome to the second round of the Epic App Battles of Android: Music Edition!

In the green corner, with 100 million downloads, we have Spotify! Spotify is the favorite in this match with a rating of 4.5!

In the blue corner, with 5 million downloads, Songza hopes to overthrow Spotify coming in at a ranking of 4.4!

Can Songza overcome the crowd favorite, Spotify, in a head to head battle? Read on and find out.

Spotify kicks things off with a slick interface consisting of dark greys and a ‘Spotify’ green. It isn’t overstated, but it isn’t boring either.

On certain screens, there are soft gradients that provide pleasant overall effects yet don’t distract or take away from the featured album art. Spotify also provides splashes of color and muted images to add something extra to the overall app design.

If they really wanted to make that work, the ‘Now Playing’ view should slide up from the bottom when you open it; however, it opens like you are pulling up a new page ruining the effect. I don’t get why it doesn’t slide up when you open it because it slides down when you close that view perfectly fine.

It was a clever idea that didn’t quite land and comes off as an inconsistency and it honestly bothers me a little. For that, Spotify gets docked on the interface rating and will get a score of 8.5 for this round.

Songza’s interface just feels childish. They use what appears to be a four color gradient shifting from purple to indigo to blue and finally to green as a background. This gradient is changes throughout the day to different colors. I have yet to see a color combination that doesn’t make me cringe a little. It just isn’t as elegant as other designs being used by other apps.

The poor background choice isn’t helped by what appears to be a persistent banner ad running along the bottom of the page.

Moving on through the app, it feels like someone’s first Android app project. Lists are just the generic list view with no sprucing up. The tiles seem to be just thrown onto the screen with no thought to appearance.

All things considered, the interface is workable, but not pleasant to use like Spotify’s interface is. With poor color choices and lazy UI elements, Songza gets a 3.5 for its app design. This gives Spotify a 5 point lead to start off with. things aren’t looking so hot for Songza.

Spotify gives you a bunch of options for your music playback. They offer up various playlists that fit into different categories according to genre or mood. Once you chose a mood or genre, you are presented with a wide range of playlists that go with whatever category you chose. This gives you a great way to find new music to love, or music that will fit into your current emotions or activities.

If you aren’t into music discovery, you are able to start playlists consisting of albums or artists that you enjoy. It is really easy to create playlists. All you have to do is search through Spotify’s library of music and slap that menu button to individual songs or entire albums to your playlists. From there, you can shuffle play your playlists to only get music that you enjoy.

Another awesome feature is ‘Spotify Connect’. With Connect, you can play music through your tablet remotely through your phone’s Spotify app. The only downside is your tablet has to have Spotify open and has to be unlocked to get Connect started. However, once you have your tablet connected, you can control the music while your tablet’s screen is off or in another app.

Unfortunately, Spotify Connect doesn’t work the other way around (control phone playback with your tablet) unless you have Spotify premium. Another privilege exclusive to those with a premium subscription is using Spotify Connect on the desktop app.

Probably my favorite feature is tucked away in the settings. There is a built-in equalizer that actually works! You can use this equalizer to create your own audio profile to fit your tastes, or you can use preset options based on genre. 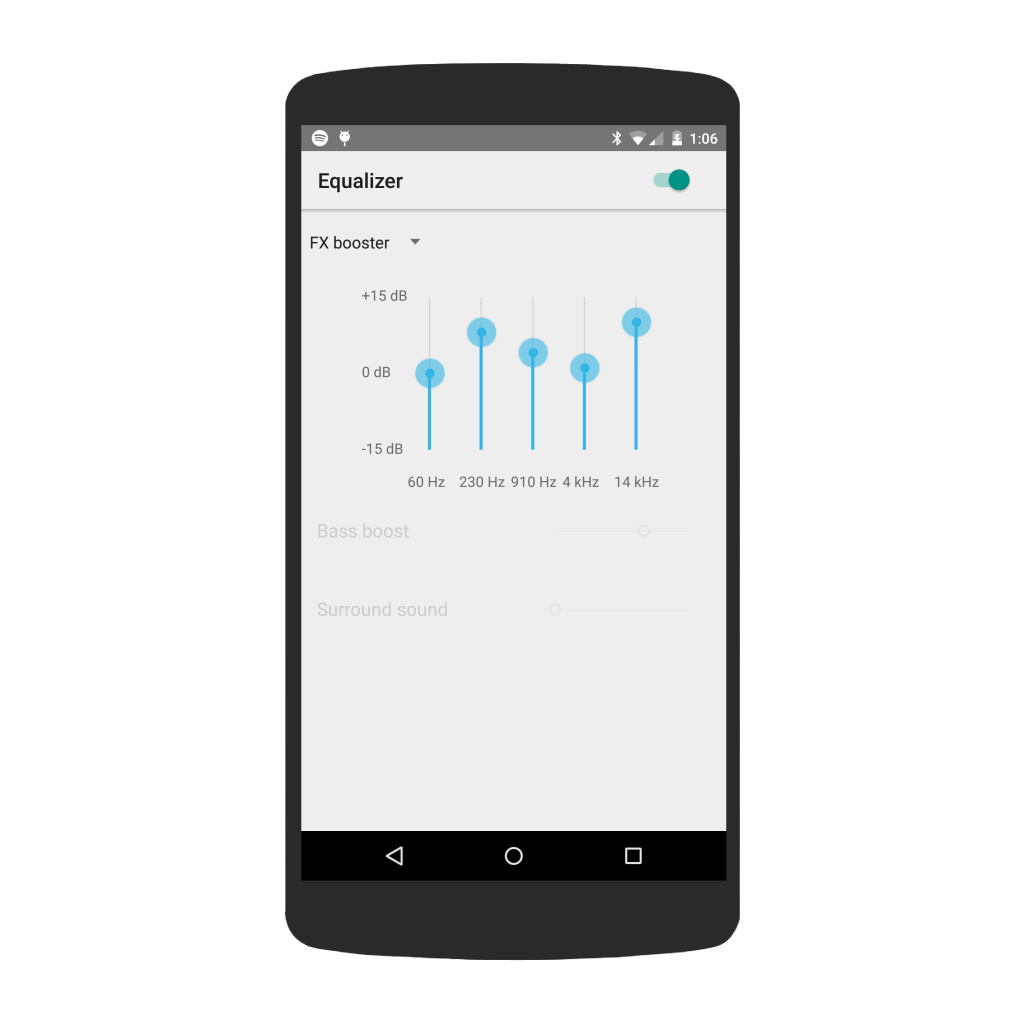 Songza isn’t trying to do anything fancy or revolutionary. They have a simple interface, which probably contributes to why I disliked it so much, and a simple goal. They simply aim to deliver pre designed playlists to cater to specific activities, moods, decades and even ages.

The consequence of this simple goal is a severe lack of features. That is all that Songza has to offer. A set of playlists tailored to for various topics. You can like or dislike certain songs in a playlist, but I am unsure of how that affects the playlist. It would appear that the song doesn’t play again, but I cannot say that with 100% confidence as I am pretty sure that some of my disliked songs came back.

Other than the playlists, you are also given a Sleep Timer that will stop your music at a set time. This is a great feature that can be used to prevent music from streaming all through the night jacking up your WiFi/Data usage.

There really isn’t anything else noteworthy about Songza. There is an option to pull up the currently playing song in the Play Store, but that is about the extent of the app.

The limited number of skips (present in pretty much every free music streaming app) and ad banner that runs on the bottom of the app are rather infuriating and the limitations of Songza are just too numerous for my taste.

There could be a market for Songza. It would be perfect for the casual listener who just needs background noise, but it is definitely not the music streaming app for me. 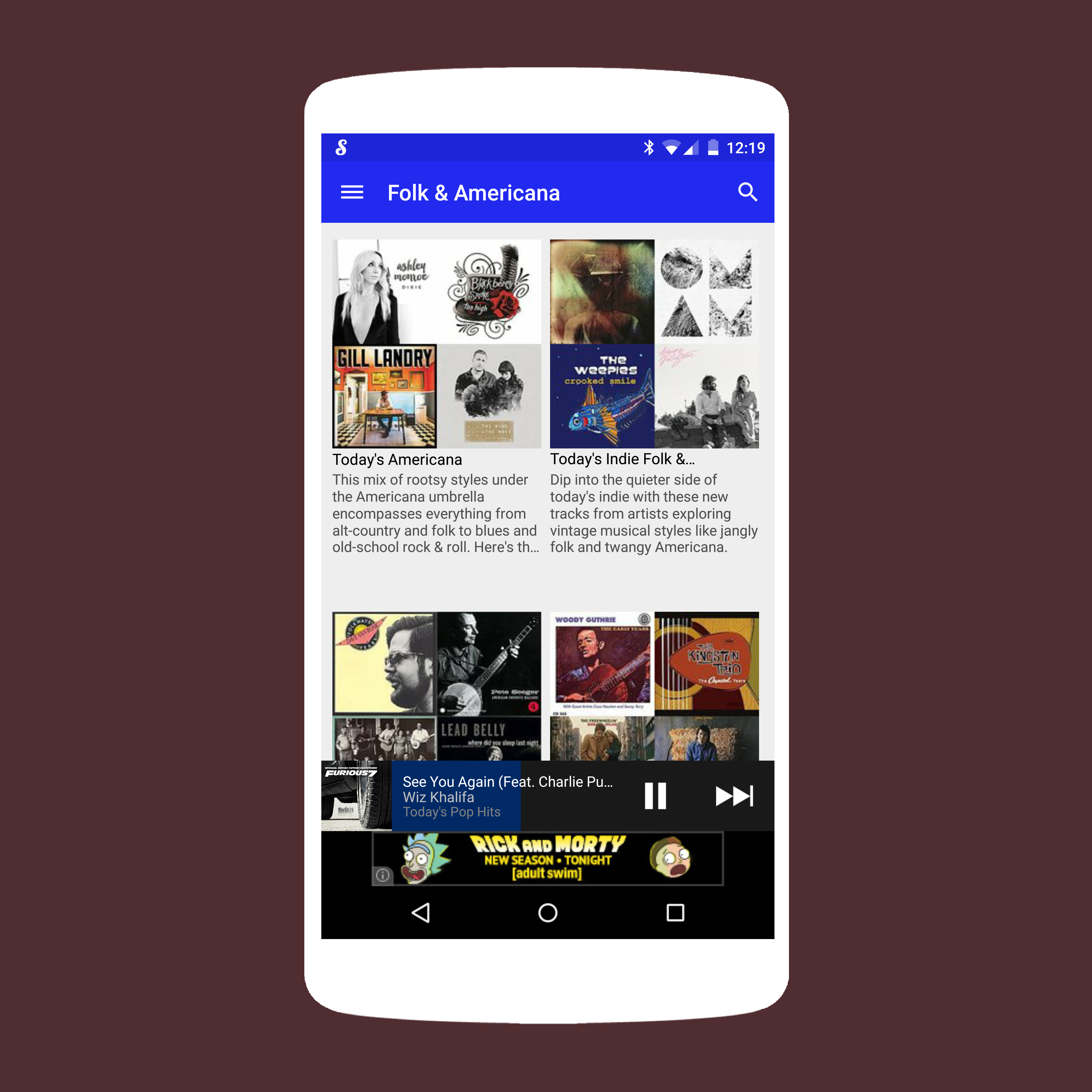 Spotify Premium Version: $0.99 for the first three months then $9.99 per month upgrades you to no ads and fewer interruptions and unlimited functionality

As much as I dislike it, you can’t beat free

After 3 rounds of head to head action between Spotify and Songza, we have to take it to the judges score cards. Not really, but we don’t want to hurt Songza’s feelings. In reality, Spotify took out Songza in the first round.

Songza really didn’t have a chance against all mighty Spotify. Spotify offers everything, well the one thing, that Songza offers and a whole lot more. Not to mention that Spotify also manages to do it loads more elegantly than Songza did.

Songza is just too simple of an app. It really does fill like more someone’s Senior project than a marketable and functional app.

I actually have to thank Songza though. After this experience, I found Spotify to be so vastly superior to Songza that I went out and paid for the premium version of Spotify. Spotify’s Connect feature and other features deserve the $9.99 a month.

However, Songza has another app in the running. As some of you may be aware, Google has acquired Songza and Songza’s functionality (predefined playlists) are present in Google Play Music. So there is a beefed up version of Songza in the form of Play Music that is another contender in the great Epic App Battles of Android!

So that is how I rank Songza and Spotify against each other. Which one do you prefer? What is your go-to music streaming service? Let us know in the comments down below!