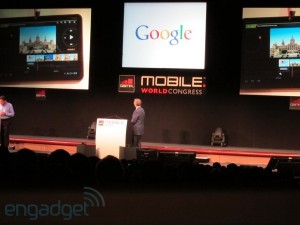 Current Google CEO Eric Schmidt was just speaking in Barcelona today at Mobile World Congress where he laid out a bit of news on the Android front.  First, we’ll get to some cold, hard numbers such as activations and applications.

As of today, February 15th, there are 350,000 new Android phones being activated on a daily basis.  That equates to more than 127 million Android devices a year at the current rate.  Bananas, right?  These activations come from 170 compatible devices, 27 OEMs, and 169 carriers spread across 69 countries.  How about the apps and games for users to download on all of these new handsets?  The official tally now sits at 150,000 applications, more than three times what it was just nine months ago.

We also learned for the first time that Google has rolled out a movie editing application for Android (Honeycomb) called Movie Studio.  The premise is simple – let users edit videos directly from an Android device much like they would from a PC.  We can’t wait to see more of this from the official Android developers blog or Google Mobile.

Engadget has a great play-by-play of Schmidt’s speech today where he discussed Honeycomb, Gingerbread, Chrome, NFC, LTE, and all the other stuff in between.  It’s fun to think about where we could be a year or more from today with the possibilities of NFC payments and other mobile/cloud connectivity.