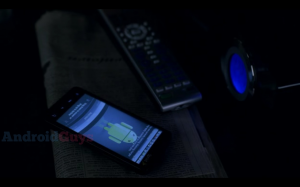 Android is becoming quite the Hollywood starlet these days as handsets keep popping up on television shows.  The latest episode of Fringe had a bit part played by our lovely Sprint beauty, the EVO 4G.  We didn’t catch the show yet,  but we’re told that the “ringing scene was quite long and was pretty cool to see the little android man.”  When is it not cool to see the Android man?

Has your Android phone been spotted in film or television yet?

Thanks for the screen Dogan!