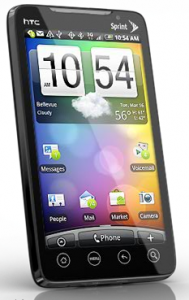 We’re starting to see a significant number of emails and questions coming our way about the latest Sprint handset.  Rather than trying to answer them all over and over again, we thought we’d put together a quick list of FAQs to help you out.  We may be adding to the list as time goes, so check back if your question isn’t answered!  Have something you feel needs asked?  Leave it in the comments and we’ll try to incorporate it if we think it’s relevant enough.

What rate plan do I have to sign up for?
The Evo 4G will require an Everything Data Plan, which starts at $69.99 per month plus a $10 “Premium Data Add-on” which covers WiMAX support. the heavy data usage that the phone will encounter. Yes, even if you do not live in an area that supports 4G.  Wouldn’t you like to have it just in case you traveled to a market that does offer 4G?

Are there limits to how much data I can use with the EVO 4G?
If you are using 3G, Sprint reserves the right to limit you at 5GB per month.  Hit that and the carrier says they can limit speeds, suspend service, or outright terminate your connection.  As far as 4G goes, the sky is the limit (for now)!

How fast is the 4G speed, really?
Engadget reports that they were able to consistently hit 4Mbps downstream with 1Mbps upstream while at the press event.

Can I talk and browse the web at the same time?
Yes, you can…  If you are in 4G coverage.

What’s so great about the EVO 4G?
For starters, this is the first handset to feature WiMAX support, meaning  faster data connections for your apps.  The screen size is a massive 4.3-inches and it looks gorgeous in your hand.  Other features include HDMI output, Android 2.1 (Sense UI), an 8-megapixel camera on the back, and a front-facing camera.  Oh it also shares internet connection with its mobile WiFi feature.  Connect up to five devices over 3G and up to eight when using 4G speeds.