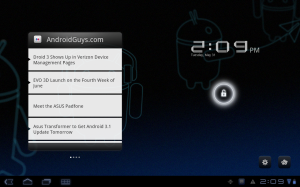 Flyscreen, the developers behind… well, Flyscreen, have pushed a new version of their Android lock screen application to the Market today.  As you can gather from the title of this post, the latest release is centered around its optimization for tablets.  I’ve had a chance to play with this iteration for the better part of a week now and have come away impressed.  I was a fan of Flyscreen on my handset but I think tablets is where the app really shines.  Given the large amount wasted space on lock screens, Flyscreen works well here and gives users all the news and social networking goodies they need.

Face it, half the time you turn your phone/tablet on it’s just to check on twitter and Facebook.  This is where Flyscreen really shines, especially on tablets.  You get the information you’re looking for, without unlocking the device and heading into an app.  And where you might want to share your feeds and posts, Flyscreen makes it a breeze to do so.  So if you see something worth reading later from a favorite blog or news site, you can throw it into an app like Read It Later.

Formerly an iPhone-only feature, Flyscreen is also announcing that their Ambient Mode themes are now included in this Android release.  This makes for a great experience should you wish to simply turn on the tablet and watch the news flow. Other themes include Aquarium, Star Crawl and Airplane! with plenty more to come.  These look fantastic on 10-inch screens and put a spin on simple RSS reading and checking on friends.

We’ve been big fans of Flyscreen since our G1 days and really have to give them credit for getting smart about tablets.  After seeing how well this integrates with large displays, I have to wonder why this isn’t a fundamental feature in Honeycomb.  It’s one of those “it just makes sense” features giving users such simple access to their Gmail, calendar, RSS, etc. Google ought to buy up Flyscreen and incorporate their options into Honeycomb, Ice Cream Sandwich, and beyond.  I’m just sayin’.