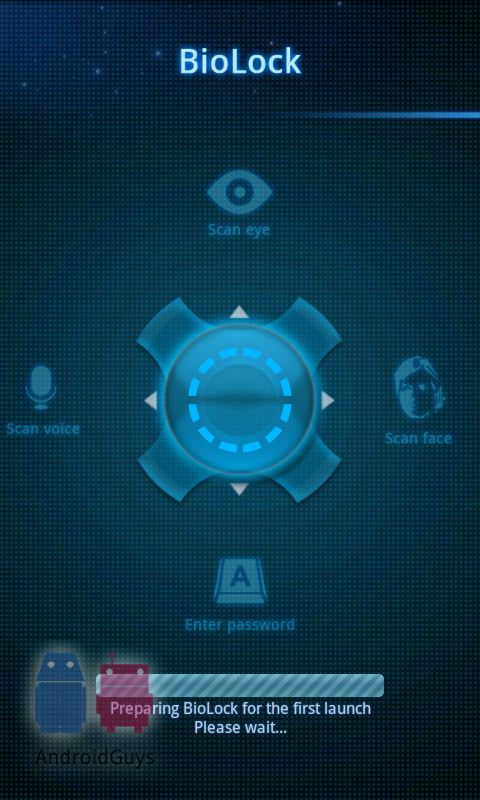 CLARIFICATION: There seems to have been some confusion that needs addressing. BioLock is NOT becoming a part of the CyanogenMod source code. CM is 100% open source, and BioLock is not. Koush will merely be using the CM7 source code to build his own BioLock equipped ROM for the Nexus S. You may now proceed…

If you recall back in early December, AG gave the Interwebs its first detailed insight into what the world will soon come to know as BioLock. Developed by Blue Planet Apps, the program brings true biometric authentication to the mobile platform for the first time in history. CEO Jason Braverman was featured as a guest on our Monday night podcast back on December 13th. If you missed out, you can still hit up our archives at BlogTalkRadio.

This time around, AG has been fortunate to receive an exclusive look an actual test APK of BioLock. This version allows us to see facial and voice recognition first-hand. No one besides developers working on the project have been granted such access to the app, and we are grateful to be Blue Planet Apps’ go-to guys. Before I begin, I will note that iris scanning is still a work in progress, and is not available in the APK we tested. Braverman explains:

“Iris is in development and needs infrared technology in the camera to be 100% accurate, but we made a breakthrough and will be able to get nearly 98% accurate with current tech.”

Braverman also had some other interesting tidbits of news to share with us. We all know that the best way to iron out new software is through a group of dedicated, bug reporting beta testers. So, who make up the best lab rats in the universe? CyanogenMod addicts–that’s who. Blue Planet Apps has therefore come to a deal with the infamous Koush, who is the maker of ROM Manager, ClockworkMod Recovery, a contributor to CyanogenMod, and said to be one of the most brilliant Android devs out there. Koush will be helping with BioLock development. Here are the details of the partnership:

“Koush is going to spend the time to get BioLock put into CM7 on the Nexus S as the lockscreen. This will be the first time we release it to the public and will be our beta. It will give us a chance to learn about how users use face/voice recognition what they like, what they don’t, what improvements we can make, etc.. From this group, we will expand and adapt BioLock, to hopefully spread onto more CM versions and other devices (with Front facing cameras of course). This will constitute the BioLock Beta test group.”

It’s important to note that BioLock is not open-source code and will therefore, most likely, never be a standard part of the actual CyanogenMod code base. Koush will be doing this as a separate project. It will be an unofficial build based off the CM7 source code. Either way, it’s still pretty sweet.

Braverman also noted two other partnerships that are in the works. His team will soon have a free version of the K9 mail client with BioLock embedded. This will allow people (both running this version of K9) to encrypt emails that they send to each other. No release date was given, but development is already underway. VoiceVault is also joining the fray and will allow BioLock’s voice authentication to be expanded beyond numbers. 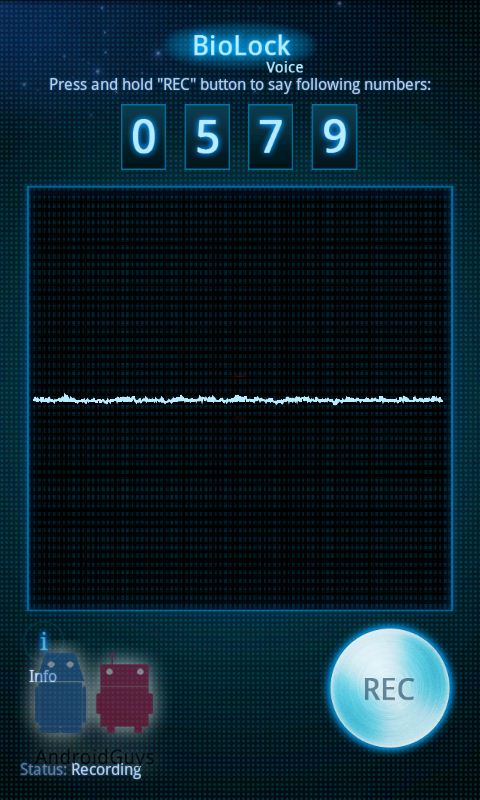 “We have partnered with VoiceVault for the voice part, and they informed us that we will likely get early access to their next version very shortly, that will allow us to expand voice authentication beyond numbers, into phrases, and that accuracy and speed are ‘greatly improved.’  Blue Plant Apps will integrate this as soon as we get our hands on it.  It is likely that users will need to choose from a specific type of phrase, something like ‘This is my voice, recognize me’ or something to that effect.”

That having been said, let’s get on with it, shall we?

When first launching BioLock, you are greeted with a futuristic looking screen with a message saying that the app is preparing for its first launch. Once that part is done, you are greeted by a British women’s voice, asking you to choose your method of authentication. Below is a video of what we were able to test out. Keep in mind that this is still an early build and only works to give access to the contents of your SD card. It serves as a basic template and proof of concept. Braverman plans to get the facial recognition down to 1 or 2 seconds by the time BioLock is released.

As BioLock development progresses, you can be sure AG will be the first to let you know. Until our next update, grab a cup of coffee (in an Android mug), read something on your Android running Nook, and cuddle up in an green Snuggie. It’s freakin’ cold outside.