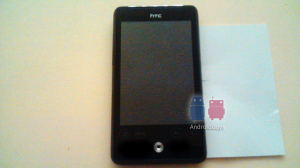 One of tipsters just passed along a few screen shots for an HTC device headed for AT&T.  They have been pretty solid in the past so we’re inclined to believe them this time around.  Here’s what they knows about the device from their brief experience with it.  The phone runs Android 2.1 with HTC Sense UI, has a 5 megapixel camera, and is “the smallest Android device” they have seen yet.  Our source took a handful of pictures of the phone next to a business card for size comparison.  We’re thinking this device has a 2.5-inch or 2.8-inch screen similar to the HTC Wildfire or HTC Tattoo.

In terms of ports, there’s nothing remarkable to speak of.  There’s a microUSB port on the bottom and 3.5mm headphone jack on the top.  We can make out an optical joystick at the bottom which HTC has favored on many of their 2010 handsets.  If we were to wager a guess, we think we’re looking at the HTC Aria.  It’s being rumored that AT&T is slated to announce this phone next week, on the same day Steve Jobs gets on stage to talk fourth generation iPhones.

Naturally, we’ll bring you more details if and when we get them!