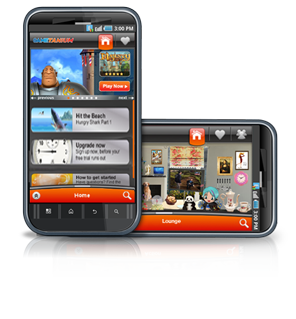 Exent has announced a partnership with RealNetworks, PopCap Games, and Glu Mobile, Inc., to help expand distribution of their GameTanium Mobile store. GameTanium is growing by the day, and with the addition of the three aforementioned publishers, it’s sure to get bigger and better very soon. GameTanium will soon feature popular games, such as Plants vs. Zombies, Peggle & Chuzzle, and many more. Stay tuned for more information on GameTanium’s growth and expansion in the coming months!

The full press release can be found below.

NEW YORK, Oct. 19, 2011 /PRNewswire/ — As part of its ongoing commitment to expanding its GameTanium catalog and bring the best of Android gaming to users, Exent today announced the addition of RealNetworks, PopCap Games and Glu Mobile Inc., among others, to its roster of publisher partners.  As GameTanium Mobile continues to roll out on major service providers in the U.S., RealNetworks, PopCap and Glu’s most popular titles – including PopCap’s Plants vs. Zombies™, Peggle® and Chuzzle™ – will be featured on the first and only all-you-can-eat subscription service that provides unlimited game play of the hottest premium games on Android.

The popularity of mobile gaming continues to drive Android growth and publishers are turning out hit Android and social mobile games at record rates to meet the demands of the anytime, anywhere gamer.  Andrew Stein, Director of Mobile Business Development at PopCap Games shares, “People play games all the time: at home, on the go, and in between. Our goal is to ensure PopCap games are available on the devices our customers want, and Exent’s distribution network helps us further our progress.”

GameTanium’s all-you-can-eat subscription service is the only model of its kind that provides a healthy ecosystem for monetization of Android games, supplying publishers with new and consistent revenue streams.  Exent’s expertise in merchandising and monetizing content fills a void in the current Android marketplace and helps Android games reach their full revenue potential.

Featuring more than 80 premium Android games, GameTanium Mobile brings together the coolest, most entertaining games in one place, for a low monthly fee.  Exent has drawn upon its vast gaming experience to curate and catalog the best mobile games so that gamers never have to waste time downloading or deleting, broken or boring games.  The service features GameTanium’s smarter programming to help users quickly find the games they want to play through featured content, recommendations, ratings, and an enormous collection of video trailers.