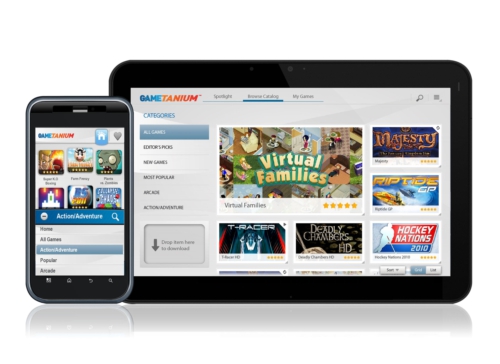 Exent, a company largely in charge of the Games on Demand for the world’s leading service providers, is hoping to complete its vision of anytime, anywhere gameplay, as they’ve just launched their GameTanium service for Android tablets. With this latest release, their service covers all aspects of gaming technology, from PCs to TVs to tablets. With GameTanium, users can get unlimited gaming on dozens of popular Android games, like Fruit Ninja and T-Racer HD, for one subscription price. It’s a bit like paying one price for a bundle of apps. The difference is, GameTanium’s market is expanding, and they’re adding more and more games frequently.

This latest release is big news for them, and they’re encouraging users to download the free 3-day trial of GameTanium to give it a try. So, tablet users, what are you waiting for? You can download the free trial from here on your Android tablet, and check out GameTanium for yourself. Be sure to leave a comment below, and let us know what you think about the service. The full press release can also be found below.

NEW YORK, Feb. 26, 2012 – @ MWC 2012 – Exent’s vision of enabling anytime, anywhere game play took another step forward today as the company unveiled the first and only all–you-can-play subscription service for tablets offering unlimited game play of dozens of the hottest games on Android, including Fruit Ninja, Baseball Superstars®, and T-Racer HD.  With this launch, Exent’s GameTanium™ service will now extend across all of the leading consumer electronics platforms – PCs, smartphones, TVs and tablets.

Coming off a 2011 holiday season that witnessed consumers purchasing tablets at a torrid pace, the recent exponential growth in sales promises to spur the consumption of games, which numerous studies indicate are the number one activity on tablet devices.  GameTanium Mobile capitalizes on this new demand by providing consumers an easy one-stop shop for filling up their tablets with only the latest and best graphically rich games available on the market.  With mobile game play continuing its dramatic growth curve, GameTanium now offers operators the ability to leverage Exent’s world leading Games on Demand service on the two mobile platforms their consumers want most.

Exent powers the Games on Demand offerings for the world’s leading service providers. With its suite of platform enablement options – from PC to TV to smartphone to tablets – Exent’s Built with GameTanium services give operators an incredibly “sticky” value-added service that increases average revenue per user (ARPU), strengthens brand loyalty and retention and can be merchandised in virtually limitless ways.  Combining GameTanium’s content and programming expertise with customizable elements ranging from a brandable UI to pricing and packaging, the service provides carriers with the industry’s most turnkey Games on Demand solution on the market.

“The GameTanium tablet offering is yet another step in our anytime, anywhere game play vision,” says Zvi Levgoren, CEO at Exent.  “We now offer our world-leading Games on Demand service across all of the platforms necessary to enable games to be played wherever, whenever and however consumers want to play them.  As a result, the service represents a great opportunity for carriers to engage their customers on a more meaningful and ultimately, more profitable level and for game publishers to drive their games more deeply into players’ lives.”

The GameTanium tablet service is available for Android tablets for a low monthly fee.  Users can start their free three-day trial of the service by visiting http://m.gametanium.com/tablet.html from their Android device.

Operators and OEM’s can try the new GameTanium tablet along with mobile and TV services by visiting Exent at the Israel Mobile & Communications Association Pavilion (Hall 6 C50) at Mobile World Congress in Barcelona, February 27 through March 1.  Android publishers and developers can also learn more about adding their apps to the service by visiting Exent at the show or by visiting http://exent.com/market-solutions/opportunity-for-publishers.html.