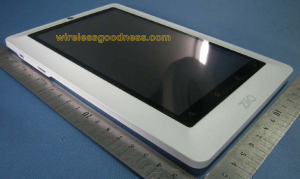 What would we do without the FCC? They’ve given us a plethora of leaks over the years. Surprise surprise, they’ve done it again. This time it’s Creative’s ZiiO Android tablet. This thing is running Android 2.1 with a 7-inch, 480×800 resistive touch screen, microSD card support up to 32GB, and a front-facing VGA camera. The ZiiO also has the standard Android specs: WiFi and Bluetooth. It’ll come in 2 different versions, one with 8GB of internal storage, and the other with 16GB. It’s also said to be running a ZiiLABS HD processor, made by Creative. We have no specs to indicate how this CPU compares to others, such as the Hummingbird chip found in some Samsung devices.

I don’t know about you, but I lost interest after “resistive touch screen”. Most manufacturers have seen that resistive touch screens are on their way out. Capacitive is the way to go, and Creative needs to see this and implement it into any future devices. No word on a launch date, but the ZiiO is set to sell from about $315 for the 8GB model to around $350 for the 16GB version. Not too bad, but the resistive screen may make this tablet a bust.  More as it comes out.