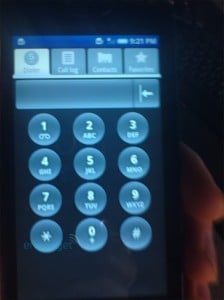 The first few pictures of the upcoming Sony Ericsson X3 handset have landed online.Â Thanks to Engadget, we’re getting a glimpse of the much lusted after handset that will sport a 4″ screen and 1GHz processor.Â  Just like with all leaked photos, they have a certain degree of blur to them.Â  Would you expect anything less?

The pics give a sense as to how big the 4″ screen will be but that’s about all.Â  Nothing special to see within the UI, just mostly stock Android stuff. There are also a couple of shots with a white model getting the unbox treatment.Â  Again, not edge-of-your-seat stuff, just further proof of its existence.

It’s still exciting to see this phone getting that much closer to real world launch.Â  How many of you are holding off for one of these?