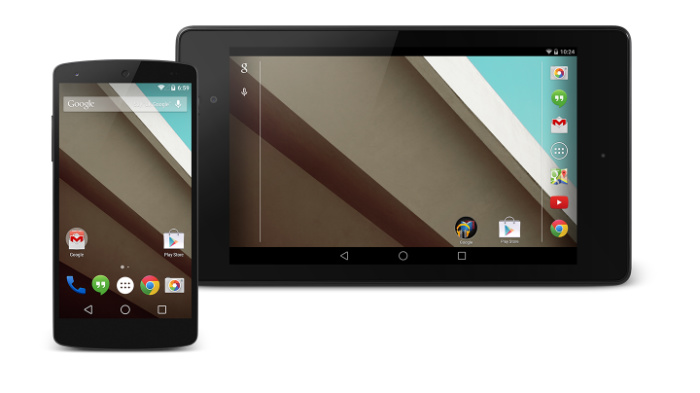 Yesterday during the Google I/O keynote, Google announced the latest version of Android, simply named L. The actual name for the latest OS version has yet to be announced, but earlier today, Google released the Developer Preview. Needless to say, once I saw it was available, I sat down and installed it on my Nexus 5.

As of right now, with the Developer Previews for L, you can only test them out on a Nexus 5 or a Nexus 7 2013, so not everyone with a Nexus can try out this version just yet. After wrangling with Terminal, and making sure that I had the SDK and ADB installed properly on my MacBook Pro, I finally was able to get the developer preview installed on my Nexus 5, and I was off to the races. The set up for Android L is essentially the same as with any other Nexus device when you start it up for the first time, with the big Play triangle telling you to get moving. After I got connected to my Wi-Fi and signed in with my Google account, I was good to go. 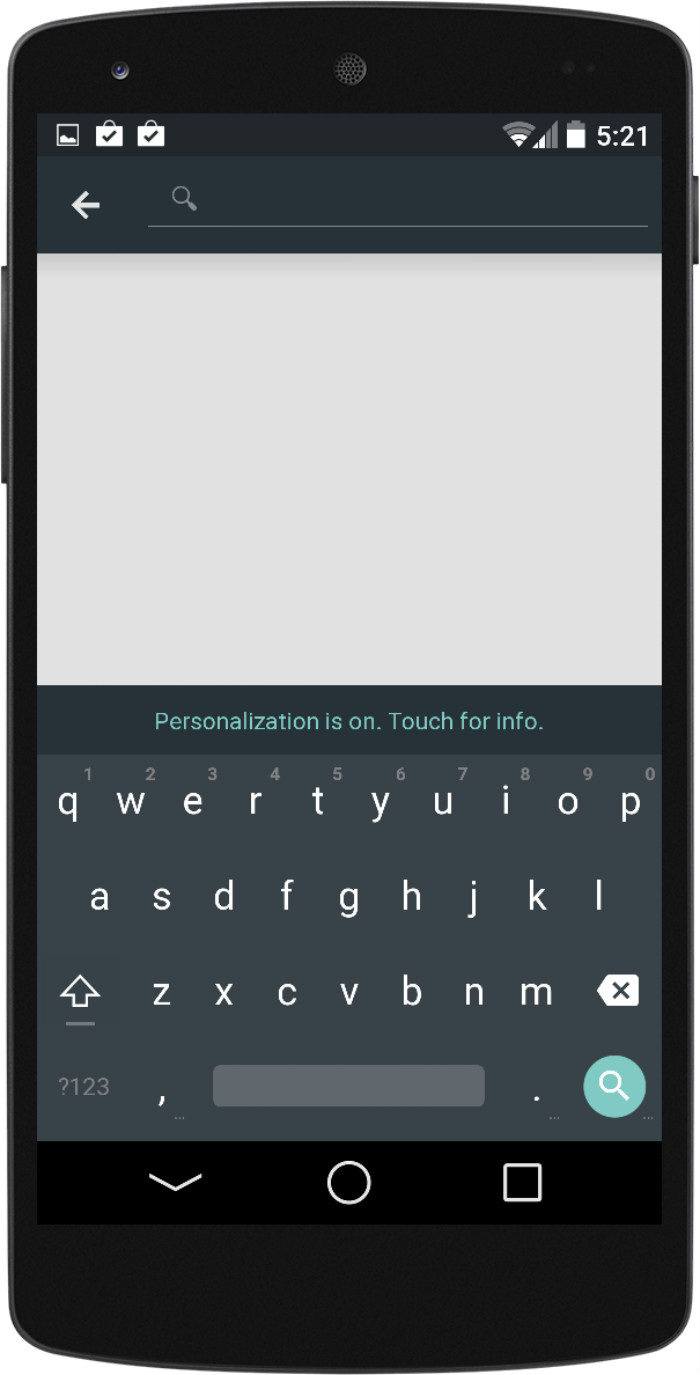 The first thing I noticed different about L was that keyboard. I love minimal and flat designs, and when the keyboard popped up, I was instantly in love. The transition graphics from having no keyboard on the screen, to having the keyboard appear, is gorgeous. It’s fluid, and it’s just different.

Whenever you find something you love, there’s always something about it that bugs you. Normal typing with the new keyboard was perfect, and never lagged once. However, once I started to use the gesture typing functionality, I ran into a few hiccups.

The first being that as Google Keyboard is trying to guess what you’re typing, it would hang up, and I would end up with a fragmented sentence that made no sense. The second being that I would slide my finger from the A to the L on the keyboard, and the input would think I had stopped at the J. I’m not exactly sure why it did this, but I’ve just reverted to normal texting for a little bit.

Now before everyone starts freaking out about how to get this look, you can head on over to the AndroidGuys Get This Look section, and get the wallpaper, as well as the navigation buttons, so you can make your device look just like it’s running Android L. I’ll admit, when I first saw the screenshots yesterday of those navigation buttons, I was a little upset. I liked the older ones, and didn’t really think that Google needed to mess with anything like that, but the more that I use L, the more I’m getting used to the look of them. 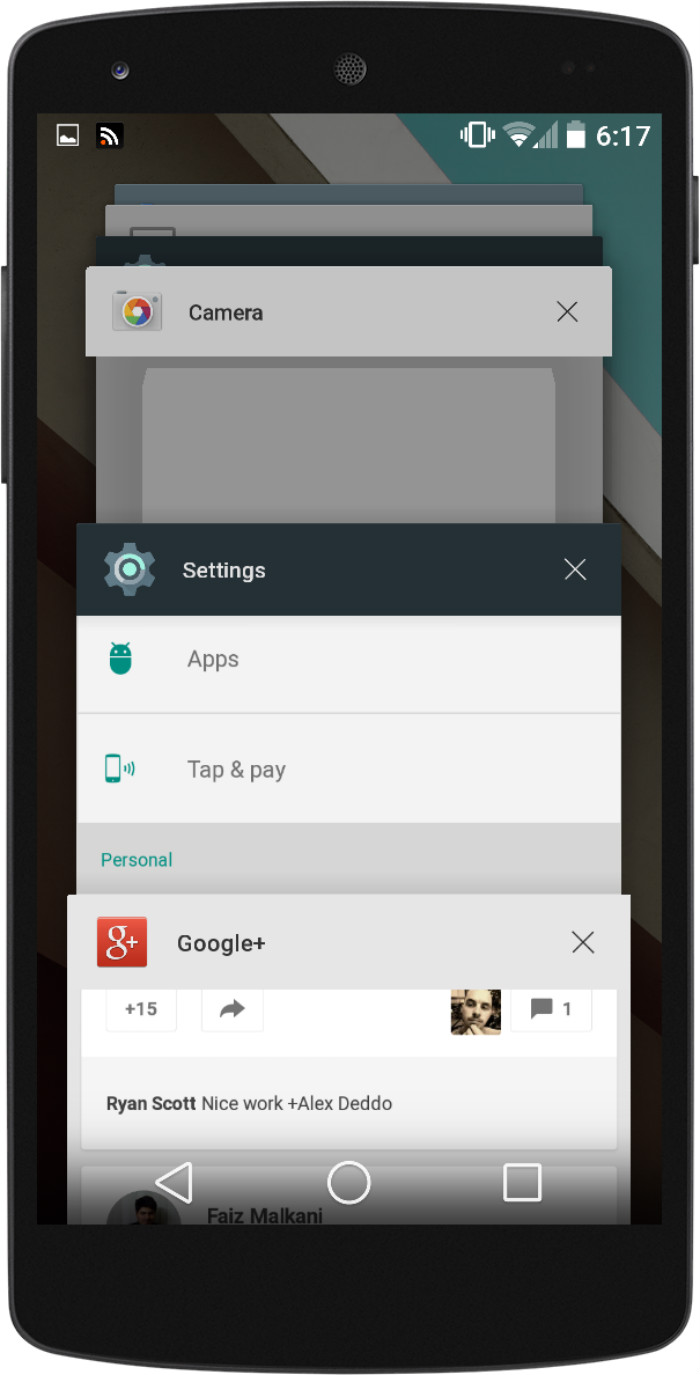 Swiping up on the “Home” button will still take you directly to Google Now if you want it to, and the Square, is now your recent apps drawer, which is what threw me off the most. Speaking of the Recent Apps drawer, Google took to this section to also redesign the way it appears on your devices. The collapsible cards theme runs deep in Android L and is found here as well. If you want to close out an application, simple swipe away, like normal, or hit the “X” in the top right hand corner of each card. 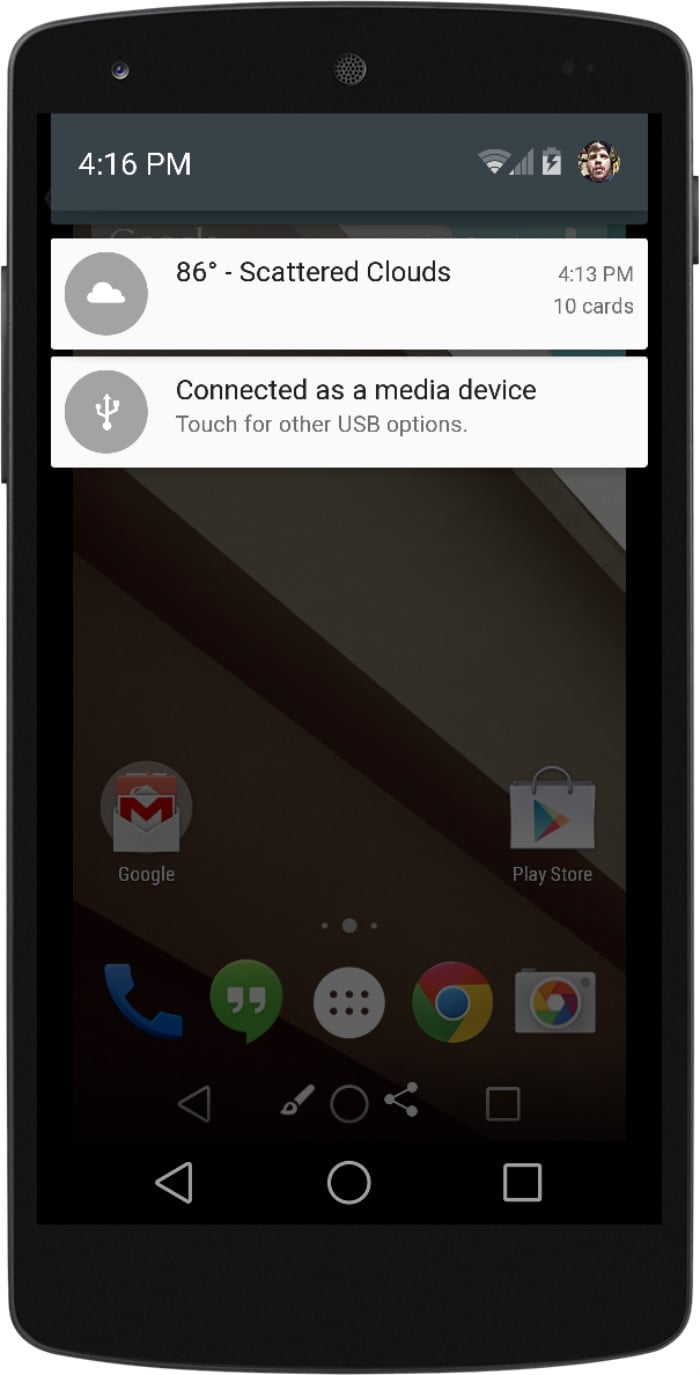 Magnifique. Like most new things, there are pieces here and there that don’t make sense at first, but usually do later on. When I first pulled my notification drawer down, I just saw a few blocks, and I wasn’t exactly sure on what to do with them. There was also no ability to two-finger swipe to bring the settings toggles down. The overall design of the notification drawer, and the notifications that it holds, are beautiful. Just swipe your notifications left or right, like normal, to dismiss them, or tap on one to open the application, from which the notification came from. 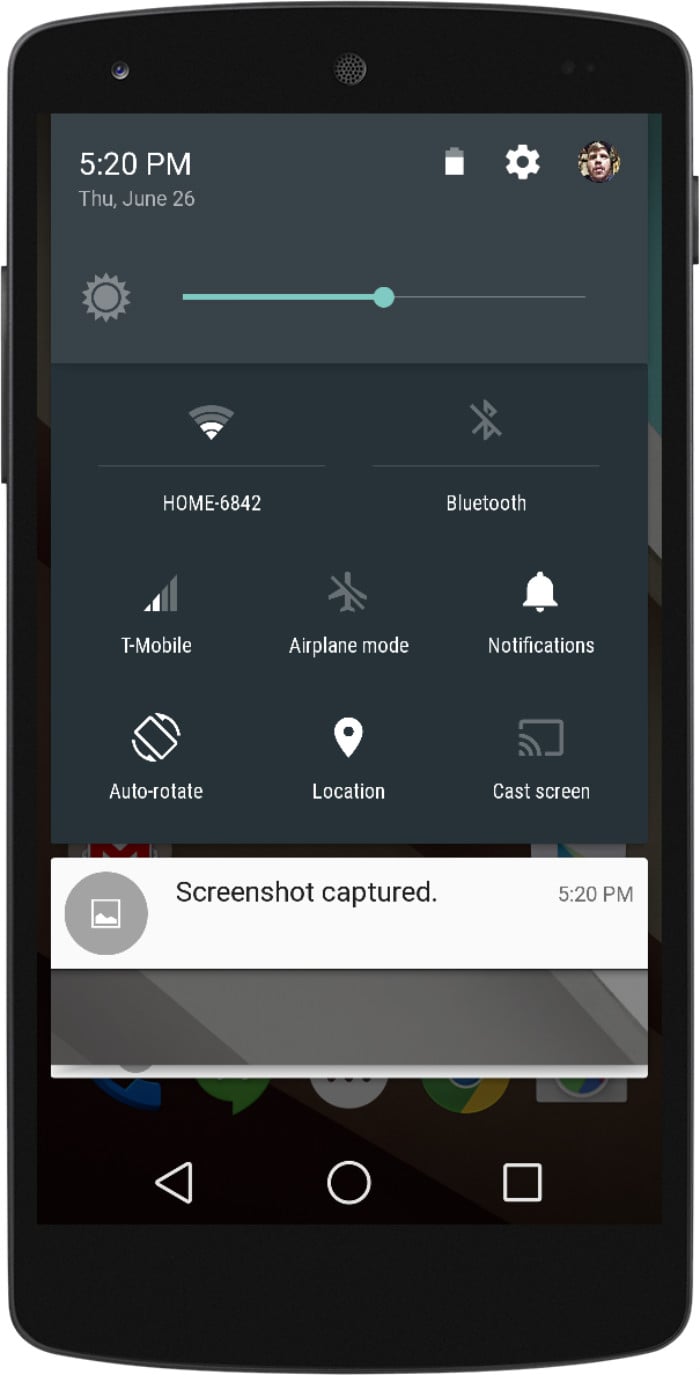 At the top of the notification drawer, you can see the time, network status, battery life icon, and your Google+ profile picture, but if you swipe down from that bar specifically, you are presented with your quick toggles. Now these aren’t as robust as they used to be on previous versions of Android, but you get the most commonly used toggles such as Wi-Fi, Bluetooth, Airplane Mode, Auto-Rotate, Location, and a couple of newbies to join the group. There is still a brightness control slider at the top of the quick settings panel, and you can still get to the Settings application by tapping the gear in the top right hand corner, but in Android L, you can now turn on and off notifications (Do Not Disturb) and you can also Cast your screen to your Chromecast. We’ll get more in depth with that, later in the week. 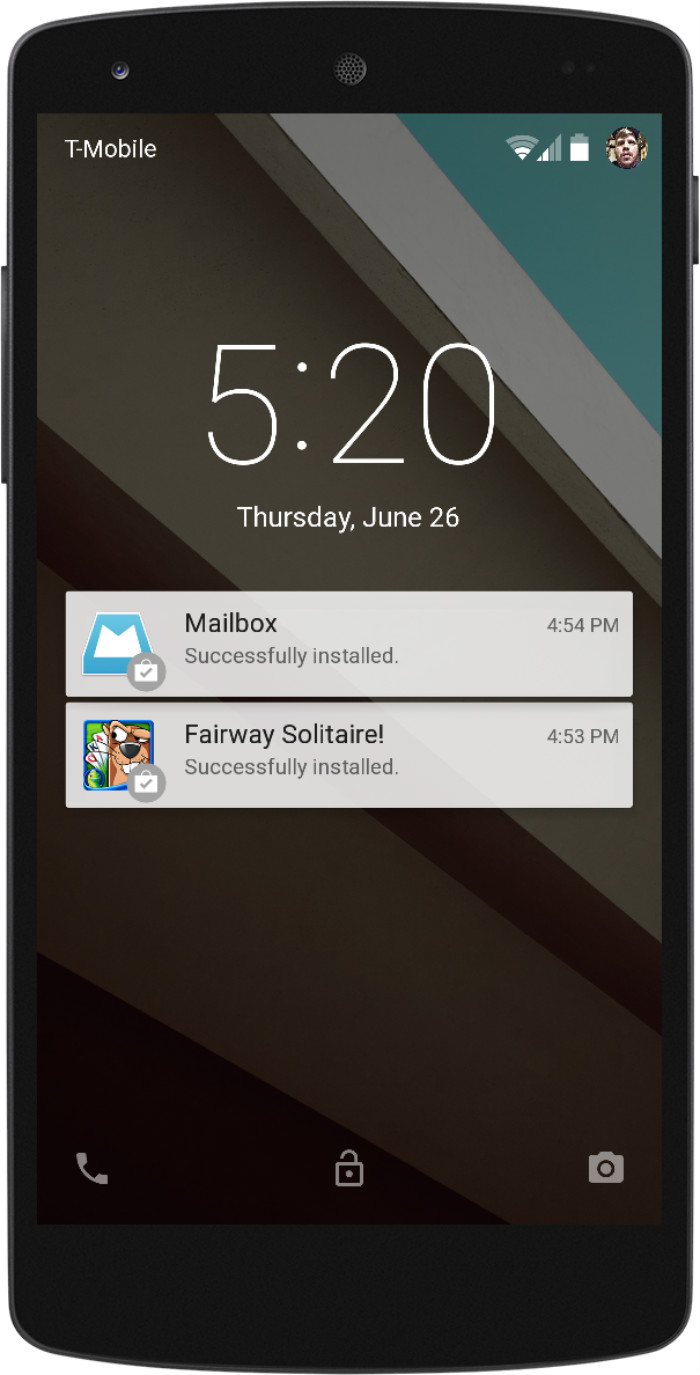 Just as with the Notification Drawer, the Android L Lock Screen has the collapsable cards that Google showed off during the I/O presentation. Smack dab in the middle of the screen is your lock screen clock, in all of it’s Roboto Light glory. When you have missed notifications, you no longer have to unlock the phone and then view the application. Simply tap twice on whatever notification you are trying to access, and your device unlocks and takes you to the corresponding application. 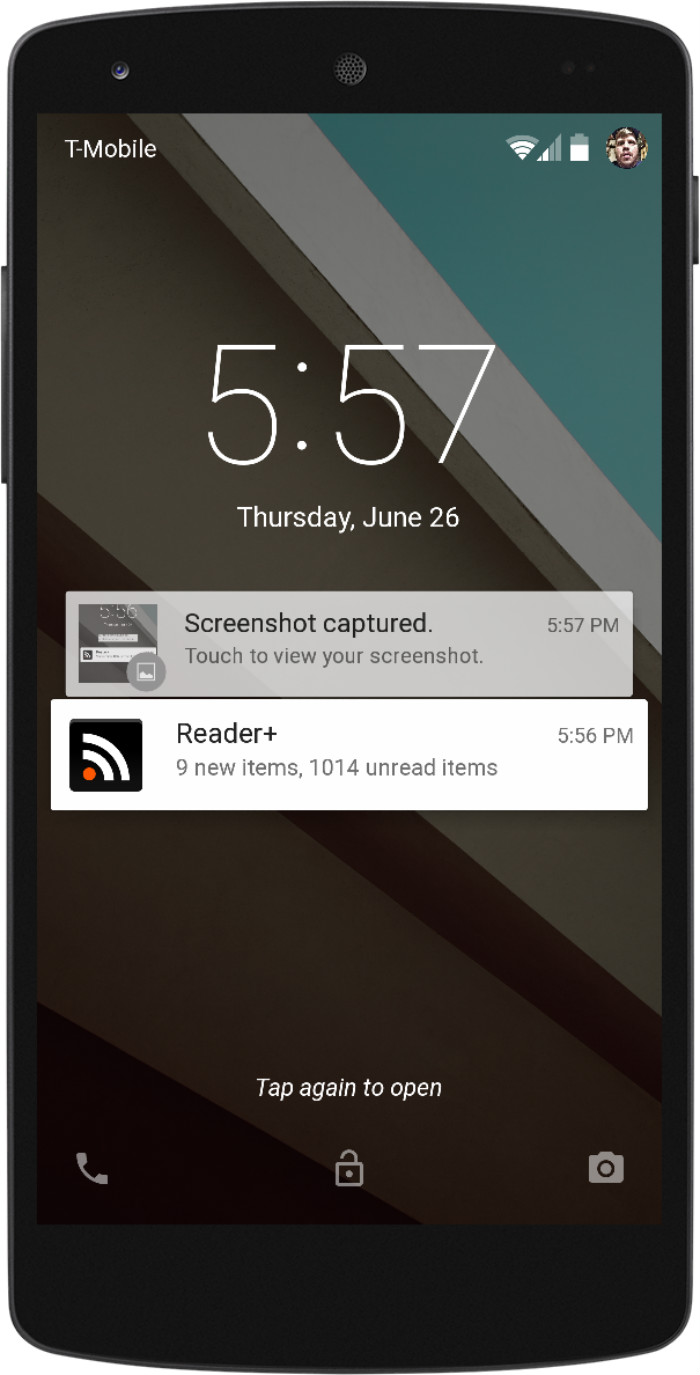 In the bottom right and left hand corners, are two shortcut icons. The icons on the right is for your camera, while the icon on the left is for your Phone. In order to access either of these applications, swipe in from the corresponding side, and that application will open up. If you swipe left or right normally, you will no longer be able to just unlock your phone, due to the unlock gesture changing to swiping up from the bottom of the screen. For some users, while charging your device, you can see how much time remains until your device is fully charged. I tried to see if I could be able to see that information, but I didn’t have the same luck as others that do. 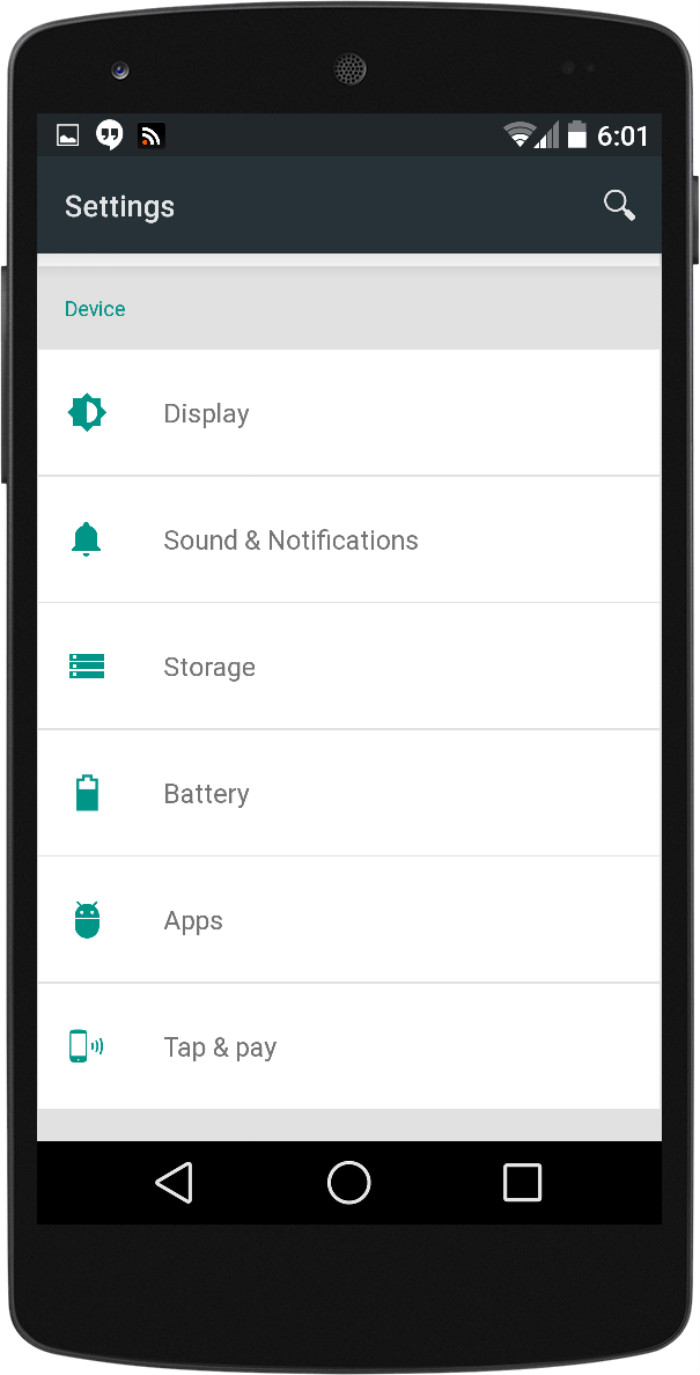 The Settings application has also had a complete redesign from top to bottom, and there are a few additional settings that have been added to Android L. The first of which is Do Not Disturb mode. This is a feature that I LOVE on my iPhone because of the fact that I get tired of my device constantly buzzing or beeping or dinging while I’m trying to get some work done. The nice thing about this feature on Android L, is the different settings that you can manually toggle, or set depending upon who you would want to hear from if you were in the middle of doing something. You can also set specific times that you want Do Not Disturb to activate, so that you don’t have to worry about going in and turning the feature on. 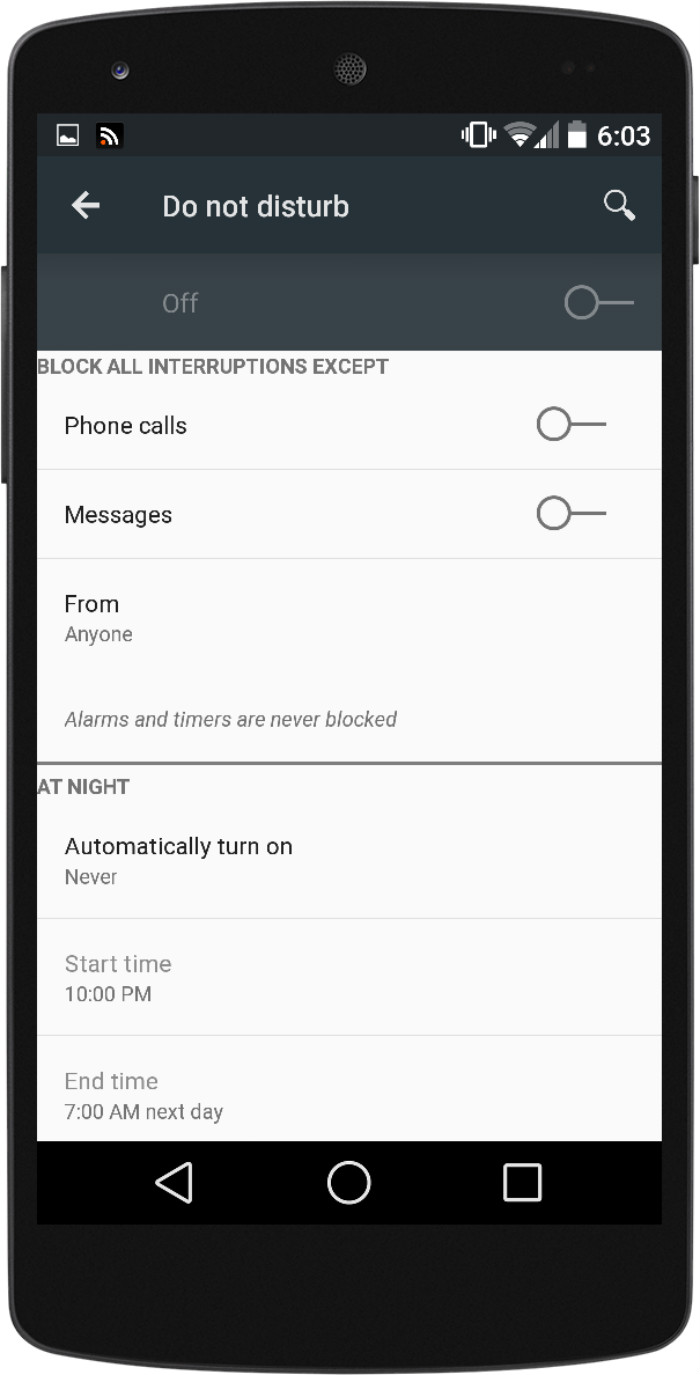 While perusing around the various different Settings panels, you can see the different graphics in play. If you scroll all the way to the bottom, or all the way to the top, it appears as if a light blue wave has come across the top or bottom of your screen. Similar to the bounce that you can get when scrolling through your home screen. There are also animations whenever you tap a specific panel from within the Settings application, and while not necessary or detrimental to the build, Google definitely added a nice touch there. 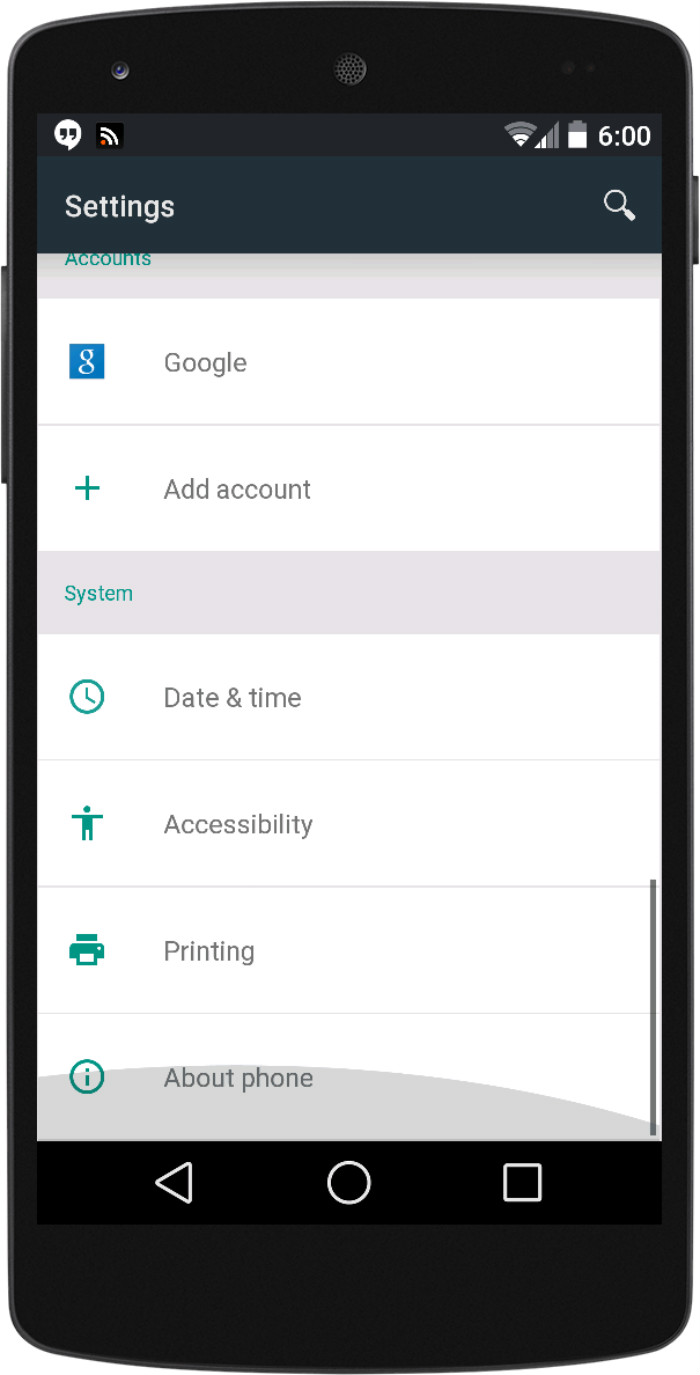 I’ve been playing around with Android L for a couple of hours now, and while this is just a first impressions of Android L, there are a lot of things that Google changed up in it’s latest iteration of Android. Have you tried out Android L yet? What are your thoughts on it? Leave you comments and questions below, and we’ll be able to get back to you promptly. Be sure to keep your eyes out for the full breakdown later this week. Your Android icon pack sucks; you should try Magme instead