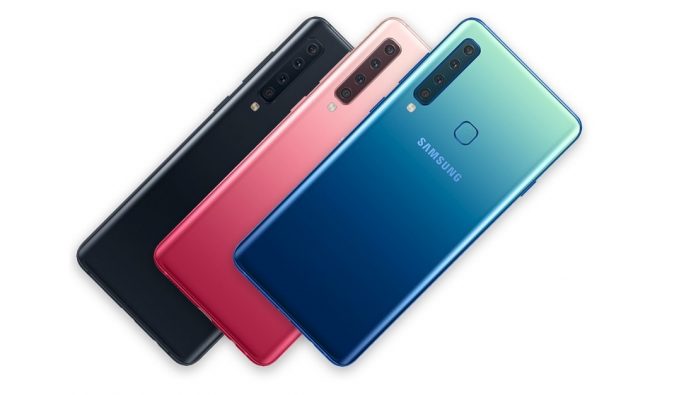 The world’s first quad-camera phone is now official and it’s called the Samsung Galaxy A9 (2018). The new phone is part of the Korean tech giant’s increasing efforts to really put the spotlight on its line of mid-rangers. Although, the Galaxy A9 is more of a hybrid between a flagship and a mid-ranger. Let’s take a look at it and see what it offers.

The Galaxy A9 is a glass/metal sandwich like most premium phones launching today. It sports a 6.3-inch AMOLED display with 1080 x 2220 resolution and 18:9 aspect ratio. And there’s no notch in sight, which is good news for those who hate this particular design detail.

The phone also includes a fingerprint scanner on the back, as well as 3.5mm headphone and USB Type-C port.

What’s middle-range about the Galaxy A9 is the processor powering it. It relies on a 2.2GHz Snapdragon 660 chipset, which is backed up by either 6GB or 8GB of RAM. In either case, you also get 128GB of storage, with the possibility to expand up to 512GB. Samsung has also included a nice 3,800 mAh battery to power this puppy.

Samsung Galaxy A9: a feast for photography lovers

And now for the piece de resistance, which is the quad-camera living on the back of the phone. The main camera is a 24MP sensor (f/1.7) which promises detailed shots in Auto mode. Next, we have a 10MP (f/2.4) sensor which is a telephoto lens. This will give the phone 2x optical zoom and the capacity to shoot much more realistic portrait shots. 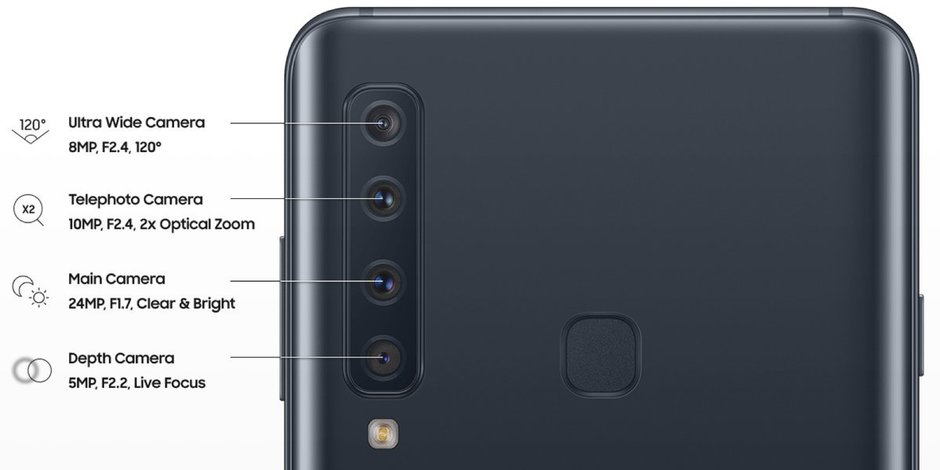 The third lens is an ultra-wide 8MP camera with a 120-degree wide-angle lens. This enables users to get the action camera look. Last but not least, we have a 5MP depth camera with f/2.2. Its main purpose is to calculate the depth, while the other cameras do the heavy lifting.

Samsung has also embedded a low light mode with the cameras. This acts by grouping pixels in clusters of 4 which results in images with a lower resolution (6MP). Even so, the system will be able to collect more light and add more exposure in low-light situations. On top of that, the A9 also gets the AI photo analyzer of the Galaxy Note 9 which warns you when you’ve snapped a pic of someone who blinked.

The Samsung Galaxy A9 will become available in November in select markets in Caviar Black, Lemonade Blue and Bubblegum Pink. The latter two are gradient color options. It will ship with Android 8.0 Oreo out of the box and will available for €599 / $700 in Europe. Will the Galaxy A9 make it into the US? We can’t tell you for sure, right now, but chances are pretty slim.