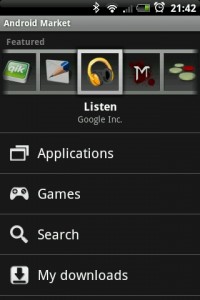 The competition to dominate the smart-phone market worldwide is played between Nokia/Symbian, RIM/Blackberry, Apple/iPhone, Microsoft/Windows Mobile and at the bottom of the table: Android (but it should better soon). As we all know, there is a good bunch of Android devices coming up in Q4 to complete the already good but limited choices we have now. This means the situation should improve once most of the operators around the world have a large range of devices to choose from. It is also undeniable that the Google brand will help Android to get more market shares, but Google also needs to get a better app store.

The reference point for all app stores has been set by Apple, even if their store is not perfect. Their approval process is very random and slow, and there are tons of useless applications amongst the 85,000 available, among many other issues. Our “beloved” Market is already sufficient when it is compared against others but there are still few things that could be improved:

Android is a great platform with already great selection of apps, however it could be better. Please do not hesitate to share you opinion; do you agree with me or do you think the Market is great and could not be better? I am expecting your comments.