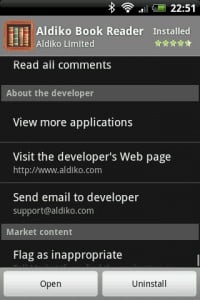 There are 4 main elementsÂ that make a successful platform: 1. great evolutionary hardware, 2. opened operative system, 3. lots of smart developers and finally 4. an enthusiastic bunch of users. If only one of these 4 elements is missing, the platform may be bound to fail over time. For the purpose of this piece, I will ignore the “phone” aspect of Android to remove the operators from the equation, we will consider Android devices as (mobile) computers rather than phones.
We are already spoiled with Android.Â  There are tons of different devices to choose from and even more to come. The OS is not perfect yet but close and as it is open there are plenty of alternative solutions (Cyanogen, MoDaCo,…).Â The developer community is to be praised, the Market is flourishing with hundred of new apps every day. As for us, the users, we do what ever we can to evangelize and bring more fans to Android… but we should be careful not to be the actors of the demise of the platform.

With all the free apps available and the modest cost of most paid apps, there are no reasons for users to go on the dark side and download illegal copies. It should also be pointed out that it could be very risky to install APKs not coming from any official apps store. Not paying for your apps will do lots of damage for the developer community and to Android.

Again, it is coming down to the relationship between users and developers, if an app you have installed is not working or do not perform as you were expecting, it is nicer and more helpful to give feedback that will help the developer (and other users). You should also feel free to contact the developer directly, see “Send email to developer” on the Market page of each app. You will find that often they are eager to help, the lack of approval process make it also easy for them to quickly make an update available to all. For instance, if you are lucky to own a device just released on which the developer has not test the app yet, you could help and do the testing to make sure bugs are corrected.

What I mean by “be ready” is to not to only answer “yes” when you are asked if what you hold is a “Google Phone” but, if you can, explain which device you have and what you can do with it.Â  Take the time to share your enthusiasm. Have some “wow!” apps installed on your device just in case you need to make a demo. For example: Aldiko, Layar, Google Sky Map, Shazam to name only few. You should also have few good games even if you are not a player yourself. The reason behind this is the following: a person is more likely to believe a user rather than advertising and news, if more people come to Android, we will get more devices, more apps and the system will continue to evolve.

David Pogue’s review of the Nexus One, which was honest and not biased as some might have feared, received very bad comments from Android fans that leads to this historical post about the “Angry Android Army”. This is sad and would be a follow up of the preaching, as an Android user you should be aware of the faults of your phone, explain why you can live with it or that there are solutions. For instance on the number of apps, yes we don’t have as many apps as the iPhone but still you can cover all the “There’s an app for that” needs. Also, more and more you will find the same app developed for the iPhone and Android.

To conclude… as users what we should cherish our developersÂ more than the devices and the operating system as they are the engine that will keep Android on the track to its success. We should also not be elitist andÂ spread the word to bring more users to Android, it can only help us.

For example, what apps are great for a demo or have you had any bad relationship with Android developers?