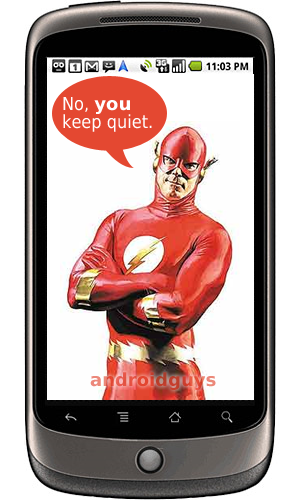 Is Flash for Android 2.2 Froyo set up in a way in which silent mode doesn’t affect the plugin?  According to one of our readers, Simon, setting the phone on silent doesn’t matter when it comes to browsing websites with Flash-enabled features.  Here’s the email we received from Simon as he describes his surprise.

…We rely on silent mode on all our devices to help the geeklet to stay asleep while allowing his mom and dad to continue to use their phones and computers.  Last night the self-playing Flash video on the Iron Chef America website woke the little guy up regardless that my N1 was on silent.  Today I’ve tested the phone on a few other noisy Flash sites and they all have played audio, regardless of the phone’s silent mode. I’m gonna have to keep earphones plugged into the device while the baby’s asleep, at least until Adobe can correct this obvious oversight…

I don’t have a Nexus One of my own to test this on so I am asking you guys.  Have you run into any issues with Flash-based websites on your Nexus One?  Try setting your phone on silent. Does it matter?  Leave a comment below and I will update the post.

UPDATE: The solution is more simple than originally thought – Instead of setting the phone on silent, turn the media volume down.  This would cover not only the browser, but also your music player and videos.

We also received an email from Adobe’s Mark Doherty who adds the following, “…The silent mode on Android is for Calls only, these are considered interruption events.  The Android OS dictates that Media players have their own volume controls, this is common across most platforms.  All sounds except Media and Alarms are silenced.  So in fact, this has nothing to do with Flash.”