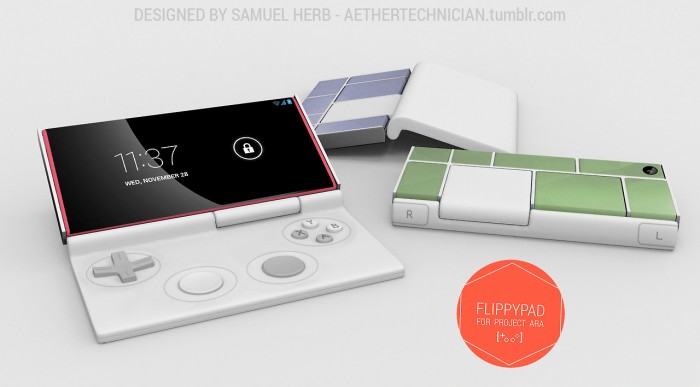 By now, everyone has probably heard about Google’s Project Ara modular smartphone that should arrive in January 2015.

While there are plenty of people talking about the potential to swap out components such as the display, camera, processor, battery, etc., one concept is making its way around the web that could bring an almost Nintendo DS/3DS gaming experience to the smartphone.

Designer Samuel Herb is sharing a concept he created called Flippypad for Project Ara, a hinged controller that turns the smartphone into “a neat little clamshell gaming device.”

The concept has L and R buttons, a D-Pad, two flat joysticks “and the familiar ABXY diamond.” The hinged component concept also connects into the back of Project Ara to power and integrate it.

This could be the perfect accessory for gamers who want to carry as little with them as possible and allow them to get great gaming experience out of their mobile device as well.

Herb said that if anyone wants to see something like this made, they should try and get the word out, then maybe it will find its way to the right people and he can start developing it for real.

Would you be interested in such an component/accessory? Are you excited for Project Ara?

VIA The Aether Technician