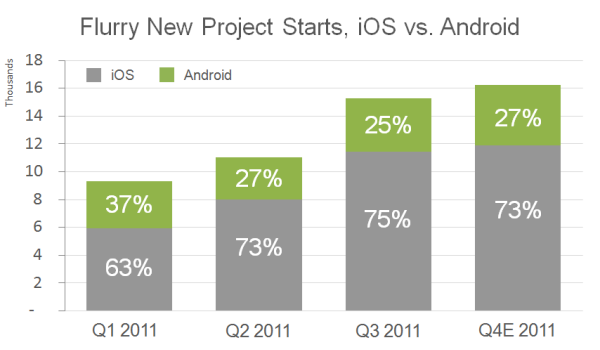 Flurry, a leader in mobile application analytics and advertising, has posted a new article on their blog which looks at the ongoing war between Android and iOS.  Yes, we know that Android now commands more than half of the market share around the world and that more than 200 million devices have been activated to date.  We also understand that because of multiple vendors, handset makers, and partners involved, Android is continuing to expand its empire.  So why aren’t developers flocking to the platform like they do for iOS?

The blog post points out that new project starts for Android have decreased over the course of 2011, dipping from 37 percent down to 27 percent.  Apple, on the other hand, has gone from 63 percent to 73 percent in the same time frame.  To be fair, both have increased substantially in overall volume and Android’s 27 percent actually includes more new projects than when at 37 percent.  Since the second quarter, Android has danced around the 25 percent share with Apple pulling in roughly 75 percent.  Why does iOS pull in three times as many new projects as Android?  Money. Well, that and the payment system in place.

…the largest single factor that appears to impact developer support for the platform is the consumer’s ability to pay.  This comes down to Google Checkout penetration.  Upon setting up an iOS device, a consumer must associate either a credit or gift card to her iTunes account.  In theory, this means that 100% of all iOS device users are payment enabled.  This has not been the case for Android, resulting in lower revenue generation possibilities on the platform.

Flurry has found that for every dollar generated on Apple’s iOS devices, Android generates 24¢ with the same app.  It’s worth noting that Flurry’s figures are not indicative of the entire ecosystem as even they admit that “Flurry Analytics powers approximately 25% of all apps downloaded from the App Store and Android Market combined.”  Still, with 55,000 companies across more than 135,000 applications, it’s a good barometer of how things shape up. 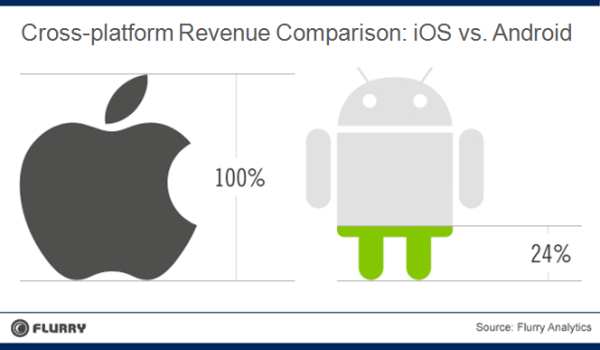 Google’s Eric Schmidt forecasts that, within six months, developers will begin to develop for Android first and then Apple and everyone else.  Based on this singular report it is hard for us to see that happening. What do you think of all this?  Can Android get to that point any time soon?