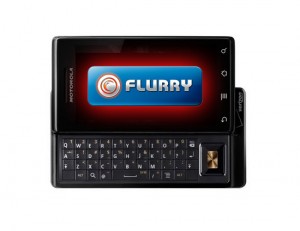 We previously reported that first weekend sales figures for Verizon’s Droid were somewhere in the 100,000 units ballpark. Those figures were based on an analyst at Broadpoint AmTech Inc.’s estimates.Â  Is there anything to substantiate that claim?Â  As it turns out, there is one report that could back that up.Â  Flurry Mobile, a leader in mobile analytics, has put the number of Droid handsets at 250,000 sold within first week.Â

Using their analytics service, Flurry monitors how apps are used for over 10,000Android and iPhone developers.Â  They estimate that they track applications used on roughly 2 out of 3iPhone and Android handsets in the market with over 15,000 million user sessions per day.

To estimate first week sales totals for the myTouch 3G, Droid and iPhone 3GS, Flurry detected new handsets within its system, and then made adjustments to account for varying levels of Flurry application penetration by handset. Flurry additionally cross-checked its estimates against Apple actual sales, released for the iPhone 3GS, which totaled one million units sold over the three days of sales, Jun 19 – 21.Â  – Excerpt from Flurry

It goes without saying that these are the strongest out-of-the-gate figures for Android so far.Â  It’s not entirely fair to compare Droid’s sales against the T-Mobile myTouch 3G as Verizon is roughly 2.5 times bigger in terms of subscriber base, plus they have the benefit of more Android awareness.Â  Oh, it doesn’t hurt to have $100 million ad campaign either.