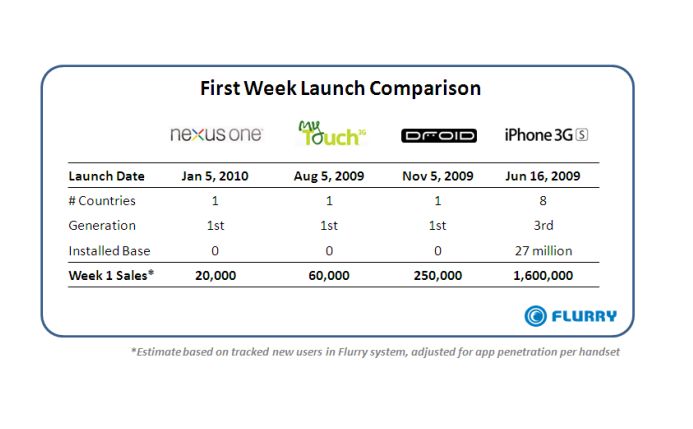 The estimates are coming in for the first week of Nexus One sales and they’re not terribly surprising.Â  Mobile analytics firm Flurry has just announced a report which ballparks the handset at 20,000 units sold in the first week.Â  While this number is considerably smaller than that of the Motorola Droid or myTouch 3G, it should be pointed out that there are factors that contributed a lighter than expected week.

There are no ad campaigns from Google, HTC or T-Mobile to drive traffic.Â  In fact, the tiny ad placed on Google’s search page appears to be gone after less than a week.Â  We’re likely not going to see any commercials from any players.Â  You’ll just have to know about the phone or learn of it from someone else.

We’ve heard the term “experiment” used more than a few times to describe the Google page to order handsets.Â  Much like everything else done out of Mountain View, it’s probably being treated like a beta project with early adopters forming how things are handled in the future.Â  The channel for ordering the Nexus One is unlike anything else we’ve seen so far here in the United States.Â  There are plenty of factors to consider as to why the handset doesn’t have higher initial sales.Â  We don’t know how many more units would have been sold had there been 3G support for AT&T’s network.Â  Further, we have no idea how many of those people would want to shell out $530 for the phone.

After hearing about the 3G troubles and general support issues, perhaps consumers are taking a “wait and see” approach.Â  It will be interesting to see what happens when other carriers get on board with the Google approach to mobile sales.Â  Will the number skyrocket once Verizon or Vodafone start offering the Nexus One?