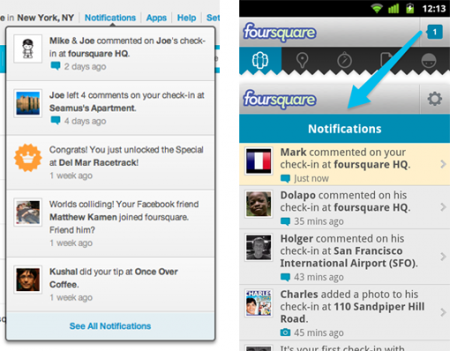 Foursquare is one of the most used Android applications on the market, being a location based social-networking website based on software for mobile devices. Recently, the Android application officially received a new update and it brings an interesting feature to it and that feature is Notification tray and at the moment, this new feature is exclusive to Android only. Prior to this new update, Foursquare was granting iPhone users the new update before Android users, but I think now they know that Android is the king.Foursquare founder told TechCrunch that “Android needs some early-access love!” We worked hard as a company to make it so different products are paced differently on different clients — so it’s not always iPhone, Android, then BlackBerry.

The new notification tray is really a good feature and you can check out your friend’s activity on the go. Check out the things after the break for which you will be notified:

a friend comments on one of your check-ins;
· there are new comments or photos on a check-in you’ve commented on;
· your friend does one of the Tips you’ve left;
· you and a friend both have the same place on your To-Do List;
· a place you’re at starts swarming;
· one of your Facebook friends joins foursquare; and,
· you’re ousted as Mayor (boo!).

Before that new update, users were only notified of their friends who just check-in, but this new update brings a lot of new goodies. So Android fanboys and girls, go update your Foursquare app and share your experience with us.