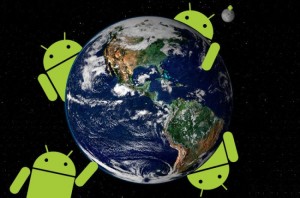 Google purchased the Android, Inc. company back in 2005, then announced the Open Handset Alliance in, 2007.  Then in the Fall of 2008, the lowly T-Mobile G1 was open to the public.  But the initial business model that Google put forth may have gone awry in the time since up to now.

In the beginning, Google positioned Android as a free and open-source mobile operating system that would better enable Google Search on mobile handsets and go to their bottom line for ads.  But why would Google actually go through all of this trouble to do this?  They already had Google Maps and Search applications on iPhones, Windows Mobile, and BlackBerry’s even in 2008.  No, Google wanted a native experience with their own UI and designs that would set their mobile vision apart for the competition. Then they announced the Chrome Browser, Chrome OS, and Honeycomb 3.0 to users that wanted even more online/offline interactions with their information saved in the Google cloud.  But in the beginning, Android essentially grew in a vacuum.  Sure the iPhone was a threat and even inspiration you might say, but not much was going on except for email, web browsing, and only a handful of apps.  Fast forward to today.  What do you use your smartphone for?  When I am out of the home/office, it is essentially everything.  In fact, in most cases, it can replace 90% of my PC’s functionality and then some.

Even though growth for Android is trending up quarter over quarter, but at what cost?  What has Google done to that initial free and open source OS that is now plagued by self-induced and ODM (original device manufacturer) fragmentation, slow-to-never updates for multiple devices, and UI issues that have been hi-jacked by the likes of HTC, Motorola, Samsung, et al.  If the strategy is and was to have a mobile software portal for all, than Google has succeeded.  If it was to have a cohesive design UI that would only be identified as a ‘Google’ device, a consistent experience that transcends device manufacturers, and a mobile platform that is superior to iOS then they are falling shorter every day.

I have owned many Android devices over the past few years that have had no discernible differences save the ones that were injected by the  ODM’s.  Google needs to realize, more than ever, after the recent Motorola Mobile acquisition (whether it was for patents or not) that core Android users would like an official Google phone AKA device that is wholly and totally endorsed by Google.  Yes, the Nexus One and the recent S were moderate success in spite of the Phone Store’s failure, but what about an official device that truly transcends CDMA and GSM lines drawn in the sand.   And we can finally get a device that is THE Android crown jewel that has hardware that can support at least two major updates into the future.  There is also a major change here, the reason why someone would choose Android over anything else.  When I get a new Android smartphone and/or tablet I can have it activated and sync’d before I even leave the retail outlet.  Since our Google ID’s hold the keys to native mobile experiences for Gmail, Calendar, and Contacts the devices are literal cloud portals for my information.  While this can be done in iOS it is done very much in an ad-hoc way and usually is a very dissatisfying experience.  One of the only ones, I might add, is the iOS native email client when using Gmail.

Another issue that Google cannot change: Moore’s Law is on hyperdrive when it comes to mobile processors and RAM.  Literally, every few months new and faster processors are flying out of TI, Qualcomm, Samsung, and even Intel will be getting into the Android game.  Not to mention that iOS has slowly improved their features with wireless sync, multi-tasking, and the coming iCloud that will definitely bring it up to Android’s parity.  And given their tight control over production, marketing, and the supply chain the iPhone 5 will be a formidable competitor to everyone.  This is an exciting time in Mobile and I am definitely living in at the Android Camp, but the competition here is moving every which way.  With RIM and Microsoft regrouping, only Apple and Google are seeing constant growth without acquisition and compromise, quarter over quarter.  Google needs to re-focus Android in quality and not quantity.  Android has the numbers and to some extent the pedigree but what it does lack is polish and perceived quality in both hardware and software.  This is what drives good software.  Users are not interested in pragmatism and functionality only anymore.  I believe that all modern mobile experiences can achieve that so the bar has now been set incredibly high.  Android needs a comprehensive overhaul that might be coming in the guise of Ice Cream Sandwich which actually has the opportunity to be the first real challenger to the upcoming iOS 5.

Google, don’t do this: