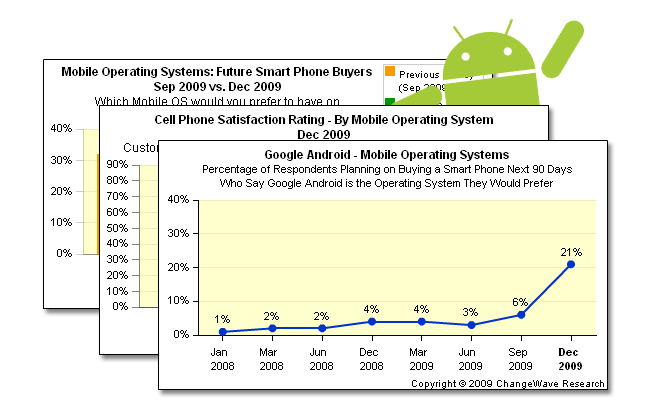 A new survey from ChangeWave research indicates that future smart phone buyers are considering Android than that of Palm, Windows, and Blackberry.Â  Only three months ago, Android was last place in terms of consumer preference, tied at 6% with Palm.Â  Fast forward to today and Android (21%) sits only a few points behind iPhone (27%).

“That change rivals anything that we’ve seen in the last three years of the smartphone market,” said Paul Carton, ChangeWave’s director of research. “This is an indication that Android has finally caught consumer interest,” added Carton.

The survey conducted between December 9-14 also found that Motorola has stepped right back into the consumer spotlight.Â  The handset maker jumped from an almost non-existent 1% up to 13% in terms of future buying preference.Â  Whether it be Android, Verizon, or a massive advertising blitz to thank, this marks the first increase for Motorola in a ChangeWave smart phone survey in three years.Â  HTC has also seen a decent jump in demand as well.Â  The Droid Eris and Hero (Sprint) have helped to nearly double HTC’s planned buying numbers from 5% to 9%.

As for current Android owners, a large chunk of them are “very satisfied” with their handset.Â  Coming in right behind iPhone, Android has a 72% Cell Phone Satisfaction rating.Â  We’d like to think that number will rise as consumers are presented with more choices and better hardware.Â  To read the full report, head to ChangeWave’s website.