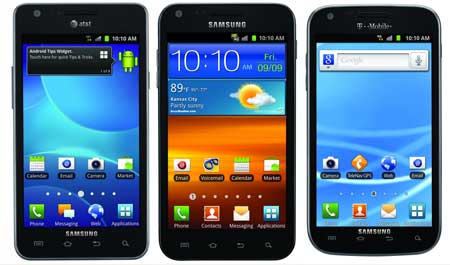 The wait is over and the Galaxy S II has been finally announced for U.S carriers.  Sprint will be the first provider to offer the device to its customers, making it available for $199 on September 16th.  AT&T and T-Mobile have their own versions coming however neither carrier is ready to commit to a date or price.  There are some specs that are universal across the three phones but each will have their own unique selling features and content.  Hit the break to read your obligatory catch-all press release!

DALLAS, August 30, 2011 — Samsung Telecommunications America (Samsung Mobile)1, the  No. 1 mobile phone provider in the U.S., today announced the Galaxy S™ II will be available  with AT&T, Sprint and T-Mobile starting this fall. The U.S. launch follows the successful debut of the Galaxy S II in Europe and Korea, where consumers bought 5 million smartphones in 85 days, making the device Samsung’s fastest selling smartphone ever. The next generation Galaxy S II portfolio packs industry-leading hardware and software and the latest version of the Android smartphone platform into each device. The Galaxy S II portfolio is highlighted by  Samsung’s own  Super AMOLED Plus display technology, a powerful dual core application processor and a robust array of entertainment, messaging, social networking and enterprise experiences.

“The unveiling of the Galaxy S II is a landmark achievement for Samsung, our carrier customers and consumers,” said Dale Sohn, president of Samsung Mobile. “Five million Galaxy S II smartphones have been sold around the world and that number increases every day. We believe the cutting-edge design, features and user experience of this innovative device will share the same level of success in the U.S.”

The three smartphones within the Samsung Galaxy S II portfolio are designed with an ultra-thin form factor and brilliant Super AMOLED Plus touch screen display. Recent independent studies showed that Samsung’s Super AMOLED Plus display technology was preferred 2 to 1 over any competing display technology in the market today2, thanks to touchscreen’s ability to deliver brilliant colors with the most contrast, providing a vivid and crisp viewing experience.

The Galaxy S II portfolio features an improved Samsung TouchWiz user interface, providing superior multi-tasking, application management, and customization and includes Live Panel which provides a magazine-like widget view for immediate access to weather, social updates, email, news, photo gallery and more, all of which can be customized on the home screen.  All of the Samsung Live Panel widgets can be positioned and re-sized to create rich, visual home screens and provide one-touch access to the information consumers use most. Touchwiz UI also includes Quick Panel which allows instant access to commonly used device settings like Wi-Fi, Bluetooth, GPS, and other key device features. The TouchWiz UI notification service on the lock screen notifies users to the number of unread or new text messages, and missed calls that have been sent to you on your Galaxy S II. Users get direct access to missed calls and text messages from the lock screen by swiping the notification boxes without having to navigate through the applications menu.

Each of the Galaxy S II devices feature six-axis motion sensing using an accelerometer and gyroscope that support advanced touch screen gestures, including motion to zoom in on images, silence a ringing phone, and even move widgets on the menu screens.

Galaxy S II will also include Samsung’s popular Media Hub movie and TV content service.  Media Hub features thousands of new release and top-grossing titles from major Hollywood studios and leading television networks, including NBC Universal, Paramount, MTV, Warner Bros., CBS and FOX. The content service has added a new feature called Media Hub Show, allowing the user to playback Media Hub content on a TV through an HDMI cable connected to a Galaxy S II dock or HDTV Smart adapter accessory. Users can share purchased to own film or TV content across up to five devices enabled with Media Hub at no additional cost.  Alternate premium video options include Android Movies, Netflix, and others which are available to download from Android Market™.

Samsung’s Social Hub service on the Galaxy S II transfers email, instant messaging, contacts, calendar and social network connections, including Twitter, Facebook and LinkedIn accounts, into “Feeds” and “Messages” folders that can be either separated into separate tabs or combined into comprehensive lists.

The Galaxy S II portfolio offers a number of convergence features to share content in tethered and wireless formats. With Samsung’s All Share application, which enables inter-device connectivity through DLNA (Digital Living Network Alliance) technology, users can send user-generated video content wirelessly to other DLNA-enabled devices, such as TV’s, monitors and laptops, allowing for an interactive entertainment experience. The TV Remote App, also available through Android Market, transforms the Galaxy S II into a remote control for several top models of Samsung HDTVs. Smart Show and Media Hub Show enables the user to tether an HDMI over micro USB connection to an HDTV to play user generated or Media Hub DRM protected content respectively directly from the Galaxy S II device to the HDTV screen.  Samsung Kies Air service allows users to connect their PC or Mac via WiFi without a preloaded application to easily view and manage your content. Users can transfer files, manage contacts and messages and send SMS from the PC.

Additional features of the Galaxy S portfolio include:

A host of premium Galaxy S II accessories, including convenient solutions for docking, convergence, and backup battery charging will be available for each smartphone, providing users with an enhanced mobile experience.  A multimedia dock is the perfect smart accessory, allowing users to transform their Galaxy S II into a home stereo by connecting speakers or plugging it into a home entertainment system via the 3.5mm stereo connector. Its ability to orient with the phone while docked makes it easy to view content in portrait and landscape mode, while the auto-launch of its Desk Dock UI makes for easy access to music, video and other applications.